Thursday, February 12, 2004
Bruce Colyer
Associate Circuit Judge
1 Court Circle, Suite 9
Camdenton, Missouri 65020
Fax # 573-346-0369
Re:  Case # CR203-1336M
DWI Detection and Standardized Field Sobriety Testing
Dear Mr. Colyer,
I could not come up with this publication prior to the trial.  If you remember I made a motion for discovery to acquire the police standard.  The Prosecuting attorney asserted that the standard was NHTSA.  I made another motion to dismiss based on the fact that I had cowboy boots on that had a 2 ½ ” heel.  As I remember it Officers Little and Taylor were in the back of the room while we went through these motions.  You think Officer Little and Taylor would have been listening.  But, at that time if you remember, I was told I could not get the STANDARDS from the prosecutor/police.  It is a matter of public information, and I should have free access to it.  Point in fact if they had been true public servants they should have given it to me as a courtesy.  Were they plotting their lie already, trying to hide the truth? Or do standards like telling the truth under oath just mean nothing to them.
I may have been naive to believe that the police asserting themselves to be authorities and trained for the NHTSA standard would at least have knowledge of them.    I may have also been naïve to assume the police would assert the truth on the stand under oath, and not MISINFORMATION, if not outright lies.
In light of Officer Little’s testimony under oath regarding a 4” heel, please give the enclosed your consideration.
If there is anything you need from me in this regard, please let me know.
Regards
David G. Jeep
enclosure
cc:      Commission on Retirement, Removal and Discipline of Judges,
Office of the Prosecuting Attorney, Camden County
Jo McElwee, Clerk of the Court 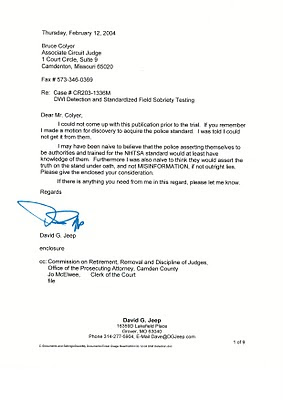 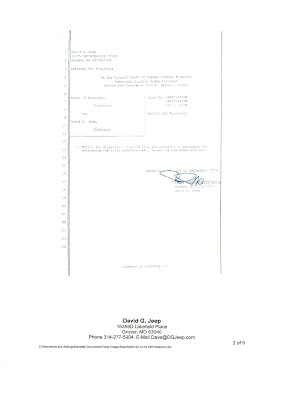 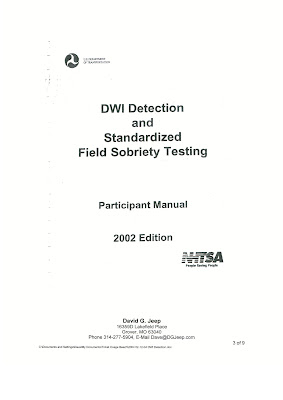 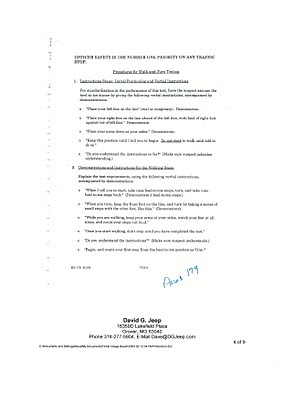 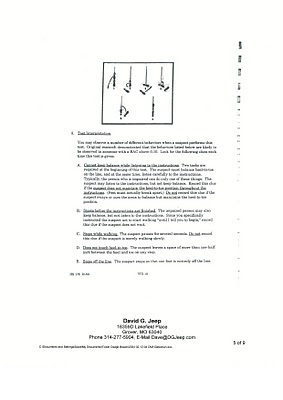 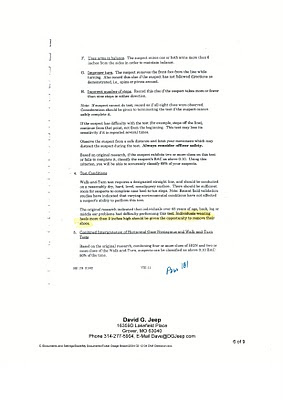 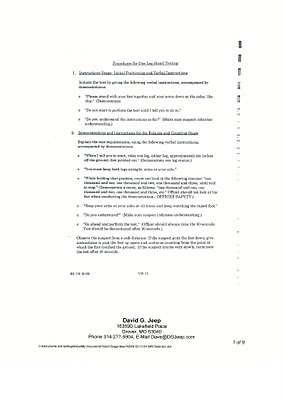 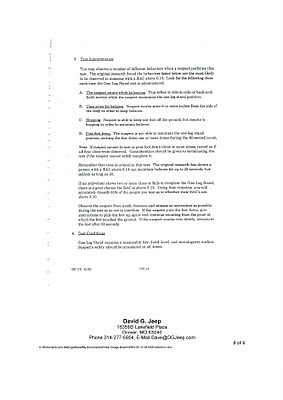 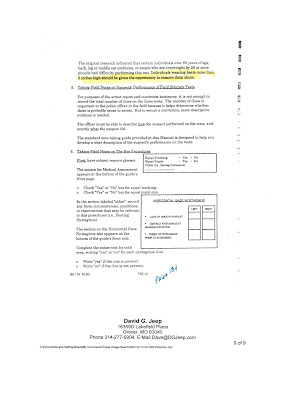 Motion for removal of Commsssioner Jones

Pro Se
IN THE CIRCUIT COURT OF THE COUNTY OF ST. LOUIS
STATE OF MISSOURI

In re the Marriage of:

1. The Respondent asks for the removal of the commissioner because he has openly admitted the mistake he made in the decision that has been in place for nearly a year, the enforcement of an unfounded order of protection. And because the attached judgments are vindictively being used to influence the respondent to concede to his error and hopefully cover it up.

2. Any judge who cavalierly allows a mistake in judgment to stand one minute longer than as is absolutely necessary is more guilty than one that may have truly been guilty of the crime. The punishments for a crime are designed, intended to be equal to the crime. If a judge cavalierly allows a punishment to be held enforce one minute longer than is absolutely necessary he has in essence committed a crime against an innocent victim. In addition he has committed a crime against the judicial system.

3. See the enclosed copy of the letter dated October 18, 2004 attached
WHEREFORE, Respondent prays that this Court will see the error of its ways and the order of protection to help insure the child’s best interest in the interim.

Motion to overturn the Verdict in favor of the Defendant Case No.:CR203-1336M

The testimony by the State’s witnesses was in some cases
Wholly inaccurate, wantonly and unashamedly prejudicial without foundation, conflicting and borderline perjurious.
1.            Comes now the defendant to state his case and ask the court to overturn the verdict in favor of the defendant.  The defendant asks for a new verdict of innocent in his favor and without prejudice or limitation to all issues of guilt that were and are related to this case.
2.            Officer Little under direct cross examination gave inaccurate testimony in front of the jury.  He repeatedly stated while under oath that it was a 4” heel not the 2” heel that required notification and opportunity for the removal of said shoes prior to taking of both the Walk and Turn and the One Leg Stand field sobriety tests.
3.            I submit that the National Highway and Safety Administration standard requires “individuals wearing heels more than two inches high should be given the opportunity to remove their shoes.”
4.            This as a fact is indisputably a part of the National Highway and Safety Administration Standard.
5.            This I submit was known by officer Little or should have been known by any officer having more 50 hours National Highway and Safety Administration Standardized Field Sobriety Testing training within the last 24 months.
6.            His offering of inaccurate information in direct contradiction of the Standard and the direct under oath cross examination and assertion of the defendant as to an inaccurate information as fact was to say the least wantonly prejudicial without foundation.
7.            Without a crediblely administered complete Field Sobriety Test the States case rest on nothing. They presented no other evidence of the Defendant’s intoxication, there for the verdict in the case should be overturned without prejudice.  The state misrepresented either through malice of forethought or ignorance either way their prosecution was based on misinformation and not factual evidence.
8.            As an officer of the court, Officer Little should be held to a higher standard as a professional presuming to give professional reliable testimony in a court of law under oath.
9.            Officer Little failed that test in that he repeatedly asserted inaccurate testimony either through knowing deception or an unacceptable level of ignorance.
10.        In Officer Taylor’s 913 sworn verbal testimony, in front of the jury, he knowingly contradicted his prior signed statement dated 5/18/03 titled Supplemental Report as approved by Matt Schwenn #915.  Please see attached copy of said report.
11.        When asked had the Defendant blown (a steady tone) for 15-16 seconds during the test administered in regard to this issue, Officer Taylor 913 repeatedly offered testimony conflicting with his Supplemental report signed by T. Taylor 913 on each page of the two page report and dated 5/18/03.
12.        This sworn testimony was prejudicial in front of the jury.  The defendant repeatedly asked Officer Taylor 913 to confirm that the defendant had blown for 15 seconds and he repeatedly refused to confirm his signed and approved Supplemental Report dated 5/18/04.
13.        Without Officer Taylor’s denial of his previous report, the state has no evidence of a refusal.  The defendant clearly blew 15-16 seconds per officer Taylor’s singed and approved report dated 5/18/03 just after the incident and the State’s own representative from the State’s Division of Health, Breath Alcohol Department testified that a 15 second blow fell to the upper end of the credible range she reported as 7-17 seconds for the average blow.
14.        In that Officer Taylor 913 had in effect sworn to the facts in his Supplemental Report and then contradicted said report again in Sworn Testimony in front of the jury his action are borderline perjurious.  And the evidence he provided was therefore suspect and without foundation.
15.        As an officer of the court, Officer Taylor 913 should be held to a higher standard as a professional presuming to give professional reliable testimony in a court of law under oath.
16.        In that the defense had no way of knowing in advance that the prosecution was going to purport misinformation and what can be construed as outright lies or contradictions of previously reported facts the defendant can not be held to a verdict based on a false prosecution.  Therefore the defendant requests the court enter a verdict in favor the defendant’s innocents without prejudice or limitation on the issue and all matters related to this issue.
17.        In a closely consider case on which the jury ponder for considerable amount of time, this wantonly and unashamedly prejudicial conduct had a deleterious effect on the defendant’s case and therefore I ask that you to take judicial exception to the verdict and issue a verdict of innocents in the defendant’s favor.
18.        Because of the above referenced unreliable and potentially criminal, wantonly and unashamedly prejudicial testimony of the state’s sworn officers of the court in front of the jury hearing the case, I here by ask that the court take judicial exception to the verdict and render a new verdict of innocents without limitation in the defendants favor including all issues and connected issues that were and are related to this issue before the court.
Dated this 9th day of February, 2004