Dear Mr. Roberts,[1]
I realize you only understand the legalese of the absurd[2] your CONTRIVED self-serving criminal[3] assertion of absolute immunity, but for the RECORD[4] and your instruction I assert:
28 USC § 2111 - Harmless error – "On the hearing of any appeal or writ of certiorari in any case, the court shall give judgment after an examination of the record without regard to errors or defects which do not affect the substantial rights of the parties."
I should not have to assert federal statute law to a federal judicial officer such as you, but alas self-serving ignorance reigns supreme in our judicial system.  It is and was the intent of We the People to eliminate the potential for legal technicalities, "errors or defects which do not affect the substantial rights of the parties," that enable the otherwise uninhibited criminal malice corruption and incompetence of judicial sophistry[5] for the deprivation of rights, privileges, or immunities secured or protected by the Constitution or laws of the United States in "any appeal or writ of certiorari."
In my ongoing, 9 + year, good faith effort your sycophants, Mr. Suter and his sycophants Ms. Johnson and Ms. Elliot do not acknowledge statute law.  I do not have to kiss your ass, I have the Bill of Rights as "absolutes," that were put then on purpose by reasonable[6] men who knew what words meant, and meant their prohibitions to be "absolutes."
It is your job to enforce statute law on your clerks, the lower, state and federal, courts, and the States per We the People's Article III, §1 & 2 and Article. VI, 2nd Paragraph of the Constitution for the United States of America.
The only truly critical piece of the originating court record is the hand written fraudulent petition as it was served on me as a warrantless court order.  The hand written fraudulent petition was used at the establishment of the criminally FRAUDULENT[7] ex parte order of protection by a judicial officer.  This overwhelming corrupt criminal judicial FRAUD took my son, my home… my EVERYTHING and corrupted all[8] that has followed in its wake.  The hand written petition was inescapably plainly, on the face of it, FRAUDULENT.  The then warrantless court order lacked the reasonable probable cause REQUIRED by State of Missouri Statute Law,[9] the 4th, 5th, 6th, 8th and 14th Amendments per We the People's Article III, §1 & 2 and Article. VI, 2nd Paragraph of the Constitution for the United States of America.  I include here copies of the fraudulent petition that became the warrantless criminally corrupted fraudulent judicial court order that was FRAUDULENTLY applied for by Sharon G. Jeep,[10] FRAUDULENTLY ordered served by Judge Joseph A. Goeke on Monday, November 03, 2003[11] and then FRAUDULENTLY ordered heard and ruled on by Commissioner Philip E. Jones, Sr. on Wednesday, November 19, 2003 over the timely repeated PRE-trial, AT-trial and POST-TRIAL in court formal verbal and written constitutionally based objections to the respondents' fraud at every timely level on all issues by the then victim/now petitioner.
For what little credibility you can still salvage I would suggest you admit the 9 + year deprivation of rights via FRAUD on the court and your share of the ongoing responsibility.  I can assure you if you leave the FRAUD undisturbed your culpability in the FRAUD will continue to grow.  The natural justifiable results of FRAUD when it overwhelms it current cover up, as I am sure you know - fraus omnia corrumpit, will be worse than you can imagine.  I for one do not want to see my government forced to go any deeper into the unsustainable corruption of our principles of justice and liberty.
Please do a favor for yourself, distribute copies of this to your corrupt, malicious and incompetent co-conspirators on the asserted Supreme Court?
If there is anything further I can do for you in this regard, please let me know.
Thank you in advance.
"Time is of the essence" 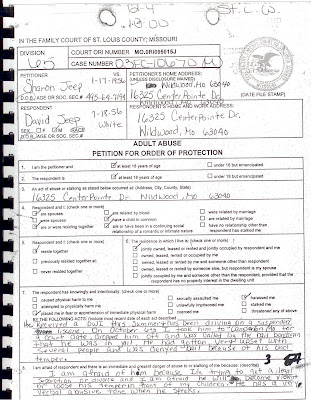 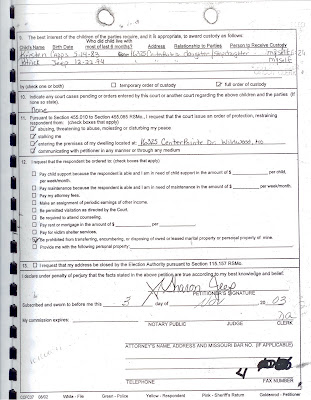 [1] I cannot call you Chief Justice; even this reference to it makes me SICK TO MY STOMACH!!!!  The Supreme Court has with its self-serving creation of ABSOLUTE IMMUNITY for itself and its sycophants, judicial (""It is a principle of our law that no action will lie against a judge of one of the superior courts for a judicial act, though it be alleged to have been done maliciously and corruptly; therefore the proposed allegation would not make the declaration good. The public are deeply interested in this rule, which indeed exists for their benefit (HOW does the potential denial of rights benefit We the People?) and was established in order to secure the independence (HOW do the judges justify independence from the Supreme Law land they WERE TO BE BOND BY?) of the judges and prevent them being harassed by vexatious actions (HOW can the deprivation of rights EVER be considered a vexatious action?)"
-- and the leave was refused" (Scott v. Stansfield, 3 Law Reports Exchequer 220) Bradley v. Fisher, 80 U.S. 349 (1871), Pierson v. Ray, 386 U.S. 547 (1967) & Stump v. Sparkman, 435 U.S. 349 (1978)), prosecutorial (Supreme Court precedent empowers the "malicious or dishonest" prosecutor by saying, "To be sure, this immunity does leave the genuinely wronged defendant without civil redress against a prosecutor whose malicious or dishonest action deprives him of liberty." Imbler v. Pachtman, 424 U.S. 428 (1976)), enforcement (Supreme Court precedent empowers the "knowingly false testimony by police officers"[8] by saying, "There is, of course, the possibility that, despite the truth finding safeguards of the judicial process, some defendants might indeed be unjustly convicted on the basis of knowingly false testimony by police officers."  Briscoe v. LaHue, 460 U.S. 345 (1983)) and miscellaneous henchman ("absolute immunity from subsequent damages liability for all persons -- governmental or otherwise -- who were integral parts of the judicial process." BRISCOE V. LAHUE, 460 U. S. 335 (1983))
[2] "This is too extravagant to be maintained." Marbury v. Madison, 5 U.S. 179 (1803)
[3] 18 USC § 242 - Deprivation of rights under color of law
[4] Be aware that the complete record is available and has been downloaded to 6 of the 7 continents on this planet at www.DGJeep.blogspot.com
[5] We have long enough suffered under the base prostitution of law to party passions in one judge, and the imbecility of another.  In the hands of one the law is nothing more than an ambiguous text, to be explained by his sophistry into any meaning which may subserve his personal malice (Thomas Jefferson, To John Tyler Monticello, May 26, 1810)
[6] "We will not be driven by fear into an age of unreason, if we dig deep in our history and our doctrine, and remember that we are not descended from fearful men — not from men who feared to write, to speak, to associate and to defend causes that were, for the moment, unpopular." Edward R. Murrow's historic "See It Now" broadcast of 9 March 1954 on CBS TV; See also the transcripts of A Report on Senator Joseph R. McCarthy
[7] Fraus omnia corrumpit is a Latin legal maxim which means "fraud corrupts everything."
[8] It corrupted everything that followed, its victim, the now petitioner, was literally at the mercy of the frauds that had instigated the fraud.
[9] Missouri Revised Statutes Chapter 455, Abuse—Adults and Children—Shelters and Protective Orders Section 455.035, where he is tasked by statute to "for good cause shown in the petition", issued a warrant without any probable cause.  A Judges' power is necessarily limited by the Constitution and statute.  A Judge does not have jurisdiction to issue a warrant without probable cause.  Not only did the petition for an Ex-Parte Order of protection not list any abuse, what it did list was third party description of an ALLEGED incident in traffic court that was being handled by another geographical JURISDICTION, 150 miles away and different subject matter jurisdiction by a judicial officer that subsequently recused himself for his bad act.  For Judge Goeke to even list it as a probable cause violated the respondent's right to the elementary REASONABLE principles of procedural due process.
[10] It should be noted that Kristen Capps, my EX step-daughter was a co-conspirator with my EX-wife.
[11] The hand written fraudulent petition for an ex parte order, has been an integral part of EVERY appeal or writ of certiorari I have filed, see numerous communication to YOU regarding Petitions for Writ of Certiorari for FIVE Eight Circuits 07-2614   David Jeep vs.  Philip Jones, Sr.;   Jeep, David, 08-1823   David Jeep vs.  Jack Bennett;   Jeep, David, 10-1947   David Jeep vs.  Jack Bennett;   Jeep, David, 11-2425   David Jeep vs.  Barack Obama, President;   Jeep, David, 12-2435   David Jeep vs.  Barack Obama;   Jeep, David, (See also Petitions for Writs of Certiorari 07-11115 and 11-8211)  see also The Evidence Thursday, October 21, 2010 http://dgjeep.blogspot.com/2010/10/evidence-thursday-october-21-2010.html

A FAILURE to COMMUNICATE!!!!!