An EMERGENCY WRIT OF CERTIORARI w/delivery


William K. Suter, Clerk
c/o Gail Johnson
Supreme Court of the
20543-0001
Re: I am in receipt of your letter dated September 22, 2011[1]
Dear Mr. Suter,
I am in receipt of your letter as referenced above.  I have now received the dispositive order for my current case (11-2425) in the 8th Circuit Court of Appeals dated yesterday September 04-2011.  Please file the enclosed Petition for a writ of certiorari as enclosed.
Immunity from the rule of law is “opposed to all the principles upon which the rights of the citizen, when brought in collision with the acts of the government, must be determined. In such cases, there is no safety for the citizen… for rights which have been invaded by the officers of the government professing to act in its name. There remains to him but the alternative of resistance, which may amount to crime. The position assumed here is that however clear his rights, no remedy can be afforded to him when it is seen that his opponent is an officer of the United States claiming to act under its authority, for, as Chief Justice Marshall says, to examine whether this authority is rightfully assumed is the exercise of jurisdiction, and must lead to the decision of the merits of the question. The objection of the Defendants/Respondents in error necessarily forbids any inquiry into the truth of the assumption that the parties setting up such authority are lawfully possessed of it, for the argument is that the formal suggestion of the existence of such authority forbids any inquiry into the truth of the suggestion.”[2]  The Defendants/Respondents argument begs the question, e.g., we are right and you can not even question our rectitude.  As Justice William O. Douglas put it sounds like the old UN-CONSTITUTIONAL adage "The King can do no wrong."[3]
As further reference I quote from the Federalist Papers #78, by Alexander Hamilton, “There is no position which depends on clearer principles, than that every act of a delegated authority, contrary to the tenor of the commission under which it is exercised, is void. No... act, therefore, contrary to the Constitution, can be valid.”[4]
If there is anything further I can do for you in this regard, please let me know.
Thank you in advance.
“Time is of the essence”
David G. Jeep
cc:  My Blog - Thursday, October 06, 2011, 1:28:34 PM

[8] 28 USC 2111 - Harmless error, On the hearing of any appeal or writ of certiorari in any case, the court shall give judgment after an examination of the record without regard to errors or defects which do not affect the substantial rights of the parties.

[9]  AS Quoted in Marbury v. Madison, 5 U.S. 163 (1803)
[10] Title Criminal 18, U.S.C, § 241 & 242, and Title Civil 42 U.S.C. § 1983 & 1985
[11] Emphasis and underlining added for reference clarity
[12] Chief Justice John Marshal in Marbury v. Madison, 5 U.S. 163 (1803) establishing Supreme Court precedent and quoting English common law per the Commentaries on the Laws of England, the 18th-century treatise on the common law of England by Sir William Blackstone (emphasis ADDED)
[13] Probable cause and Exculpable evidence
[14] See APPENDIX: Original Exparte Order of Protection where one issue CR203-1336M (DWI) is used for as unrelated probable cause for the second issue 03FC-010670 (Exparte order of protection, Abuse)
[15] See the NUMEROUS TIMELY objections and motions, pre-trial, at-trial, and post-trial for all issues as a part of the court’s record.
[16] “The very essence of civil liberty certainly consists in the right of every individual to claim the protection of the laws whenever he receives an injury. One of the first duties of government is to afford that protection. In , the King himself is sued in the respectful form of a petition, and he never fails to comply with the judgment of his court.” Marbury v. Madison, 5 U.S. 137 (1803)(Page 5 163)
Posted by DGJeep at 1:30:00 PM No comments: Links to this post

An EMERGENCY WRIT OF CERTIORARI 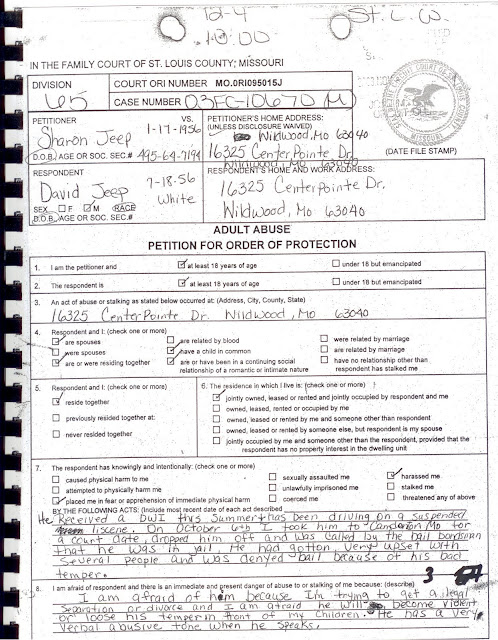