WE NEED TO KEEP OUR EYES ON THE “BALL.”

REMEMBER IF YOU DON’T VOTE THE CRAZY PEOPLE WILL!!!!!

WE NEED TO KEEP OUR EYES ON THE “BALL.”  Neither Bernie or Hillary will run a third party against the MAIN PROGRESSIVE MOVEMENT!!!!!!!!!!!!!!!!

The senate RACES Ohio, Florida, Pennsylvania, Wisconsin, New Hampshire, Illinois, Indiana, Missouri and Arizona ARE ALL WINNABLE. The TEA PARTY OBSTRUCTIONIST, Flint Michigan Trickle Down economist took them in in the midterm elections six years ago (2010).

Lawrence has the 2014 midterm election rewrite to email that Republican uncle!!!!

“Every sulfurous belch from the molten interior of the volcanic TRUMP phenomenon injures the chances of a Republican presidency.” (GFWill) There is no way trump wins! Trump is going to skim off all the crazies and make the democratic winner’s coat tails that much longer!!!!!

Nixon (the Tea Party and Trump) COURTED Senator Strom Thurmond’s (1902-2003) Southern  DIXIECRATS in his much exalted "southern strategy."  We are seeing the fruits of that in Donald Trump's avowed racism and MASS INCARCERATION!!!!!!!!

Remember if you don’t vote the CRAZY people will!!!!! REGISTER AND VOTE BLUE!!!!!!

List of Docketed and DENIED Petitions for Writ of Certiorari to the Supreme Court of the United States With links to the verbiage for same at DGJeep.Blogspot.com
http://dgjeep.blogspot.com/2015/12/list-of-docketed-and-denied-petitions.html


http://dgjeep.blogspot.com/2011/05/criminals-are-in-our-judicial-process.html
Posted by DGJeep at 3:58:00 PM No comments: Links to this post

UNITED STATES COURT OF APPEALS
for the Eighth Circuit

I ask how reckonablely[1] speaking can constitutional wording, intent and understanding of “No State shall make or enforce any law” and “any person” in the 14th Amendment, non-exigent, have ANY EXCEPTIONS?

How can any person’s[2] reckonable[3] "rights, privileges, or immunities secured by the Constitution and laws"[4] of the United States of America

immunity for the "the deprivation of any rights, privileges, or immunities secured by the Constitution and laws of the United States of America" under color of JUDGE MADE[5] law BOTH BE CONSTITUTIONAL?[6]”

I declare under penalty of perjury that the foregoing is true and correct.
Signed this Tuesday, February 16, 2016
Signature of Plaintiff(s) 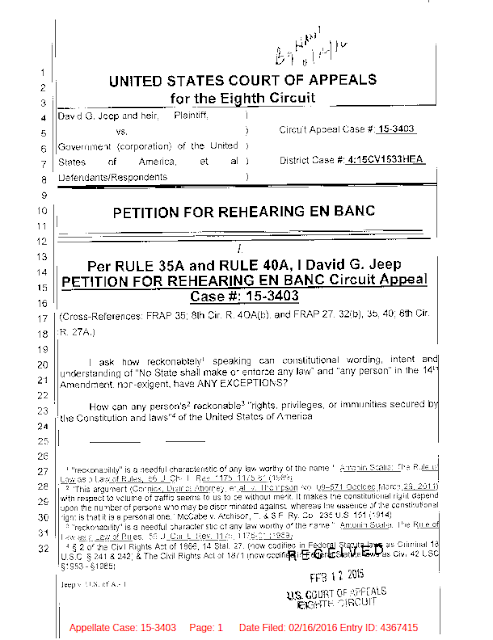 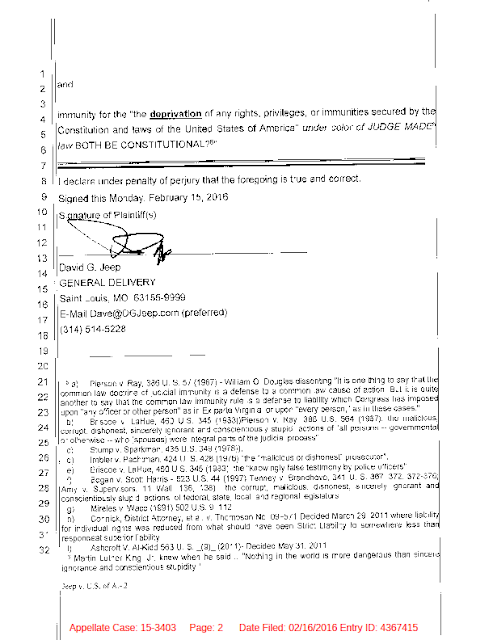 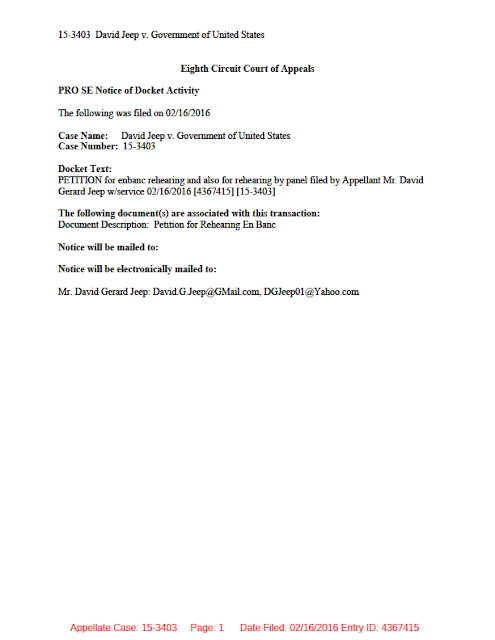