What is the DIFFERENCE between a thief, a prosecutor, a police man and a judge?

What is the DIFFERENCE between:

THEY CAN AND DO ALL ACT CRIMINALLY (18 U.S.C. § 241 & 242 Criminal Deprivation of Rights).  The only criminal that can or would ever be prosecuted or held liable would be the "thief."  The REST would walk, no matter, they put someone in jail for life, had them executed or took their children, everything they owned and liberty!!!!!

What is the DIFFERENCE between:

THEY ARE ALL INNOCENT VICTIMS.  The only innocent victim that might be able to get compensation is "the innocent victim of a thief."  There are government agencies and relief organizations that compensate the victim of gun crimes.  But the GOVERNMENT refuses to acknowledge our ex industria statute law for the deprivation of rights under color of law as a crime[4] that demands compensation.[5]

You ask why we have Jim Crow, Jane Crow and MASS INCARCERATION IN AMERICA?  Judges,[6] Prosecutors,[7] Police[8] and All Persons[9] have "absolute immunity" for "the deprivation of any rights, privileges, or immunities secured by the Constitution and laws of the United States of America."

Malicious or corrupt OR INCOMPETENT judges[10] turn a blind eye to "malicious or dishonest"[11] unconstitutional persecutions via a prosecutors[12] withholding of "evidence favorable to an accused"[13] with "knowingly false testimony by police officers,"[14] "under color of law."  IT HAPPENS EVER SINGLE DAY IN AMERICA!!!!

We need strict vicarious liability for the rights we wrote our constitution to SECURE!!!

Strict vicarious liability for rights under color of law was, is and always will be the raison d'être for We the People to have constitutionally INCORPORATED ourselves into a "government of the people, by the people, for the people."
http://dgjeep.blogspot.com/2016/04/strict-vicarious-liability-for-rights.html 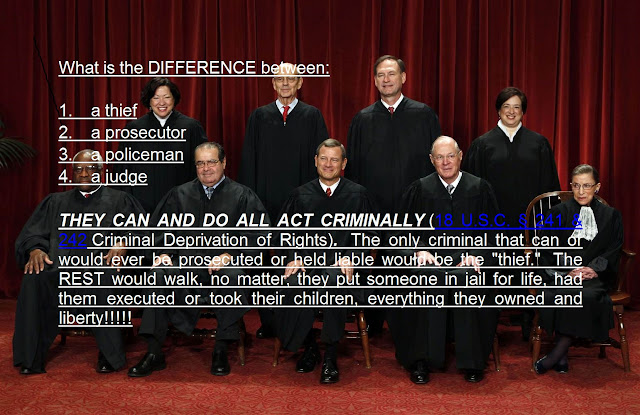 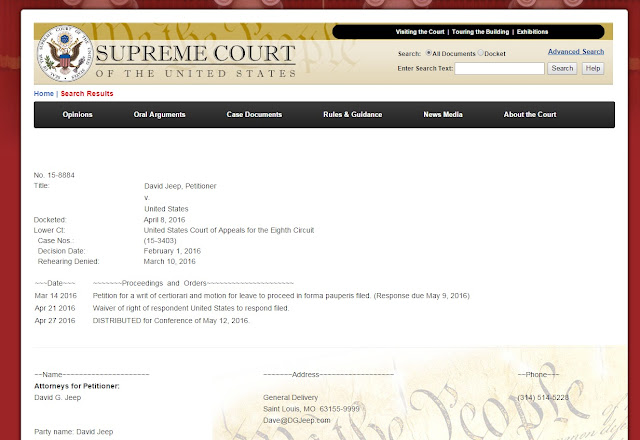 Strict vicarious liability for rights under color of law was, is and always will be the raison d'être for We the People to have constitutionally INCORPORATED ourselves into a “government of the people, by the people, for the people.”

http://dgjeep.blogspot.com/2016/04/strict-vicarious-liability-for-rights.html
Posted by DGJeep at 1:21:00 PM No comments: Links to this post

Strict vicarious liability for rights under color of law was, is and always will be the raison d'être for We the People to have constitutionally INCORPORATED ourselves into a “government of the people, by the people, for the people.”

Am I your Ida B. Wells[1] (1884) or your Rosa Parks[2] (1955)?  Strict vicarious liability for rights under color of law was, is and always will be the raison d'être for We the People to have constitutionally INCORPORATED ourselves into a "government of the people, by the people, for the people."  "Absolute immunity" was an abomination of the nobility!

As you ALL know, since 1868,[3] 1871[4] and 1883[5] the purely whimsical political issue of Supreme Court decision has been nothing more than a corrupt, malicious, sincerely ignorant and conscientiously stupid[6] means of arbitrarily depriving natural "rights inhering in a state of freedom and belonging to American citizenship."  It has nothing to do with the constitution, rights, honor, integrity, justice or truth.

I need your HELP!
The Gravamen
Petition for Writ of Certiorari 15-8884

The asserted uncontested, undeniable, NOW-exigent[7] and "reckonable"[8] gravamen was and is an ex parte court order of protection[9] without "REASONABLE PROBABLE CAUSE" from 12.94 years ago.[10]  This has been a FLAGRANT VIOLATION from day one.  The Police Officer that originally served it, laughed at it.  The first judge to hear it looked to the sky in amazement and/or disgusted.  REGARDLESS, they and EVERYONE since have without resistance upheld it.  Of course, they risked nothing when they took my son, my home and all my most valued worldly possession, threw me out on the street and then forced me into a disputed divorce where my criminal adversaries[11] had been empowered by all that had been fraudulently[12] and criminally[13] taken from me.

By definition individual rights are the spring for and preceded We the People's Constitutional incorporation of them into the supreme law of the land.  Therefore, there can be no statute of limitations on the deprivation of rights, privileges, or immunities secured by the Constitution and laws at the instigation of an action under color of law.[15]
In attuned and reconciled LEGALESE, the "reckonable" gravamen is and has always been the result of a deprivation of rights under color of law.  And now attuned to requirements of current precedent, it was and is an unconstitutional deprivation[16] of rights under color of law with a:

·         The 14th Amendment "beyond debate"[18] "reckonably" states: "NO STATE shall make or enforce ANY LAW which shall abridge the privileges or immunities of citizens of the United States; nor shall any state deprive ANY PERSON of life, liberty, or property, without due process of law; nor deny to ANY PERSON within its jurisdiction the equal protection of the laws" without NON-EXIGENT exception, and under the Article. VI. § 2 "This Constitution, and the Laws of the United States which shall be made in Pursuance thereof; and all Treaties made, or which shall be made, under the Authority of the United States, shall be the supreme Law of the Land; and the Judges in every State shall be bound thereby, any Thing in the Constitution or Laws of any State to the Contrary notwithstanding."  THUS THERE CAN BE NO JUDGE MADE EXCEPTION[19] I.E., THE DOMESTIC RELATIONS EXCEPTION.[20]

·         that over comes "difficult problems of proof" and "stringent standard of fault"[22] with the ubiquitous UNCONSTITUTIONAL "Jane Crow" assertion of a Woman's "victimhood" to the deprivation of any Man's constitutional rights in legal disputes,[23] is uncontestable.

·         that facts[24] were and are "beyond debate"[25] "sufficiently clear" THAT EVERY "reasonable official would have understood that what he is doing violates that right,"[26] (i.e., the universal reckonable understanding of the IV, V, VI, VII, VIII and XIV Amendments).

Thanks in advance,
To Kill a Mocking Bird, The Denial of Due Process
"Agere sequitur esse"
"Time is  of the essence"
David G. Jeep, Federal Inmate #36072-044
http://dgjeep.blogspot.com/
My E-mail addresses are David.G.Jeep@GMail.com or DGJeep01@yahoo.com