I just wanted to AGAIN REMIND you of your primary MORAL and CONSTITUTIONAL obligation, as a Judicial Officer, is to "establish Justice" under color of law.[1]  I am fully aware of just how corrupt you and your Black Robed Royalist Brethren have become.

I am herewith providing documentation of your sincere ignorance, conscientious stupidity, malice and corruption as regards your judicial action in 2004 on Cause No. CR203-1336M - STATE OF MISSOURI, Plaintiff, v. DAVID G.  JEEP, Defendant.  Those items are:

1.    A digital, certified by the petitioner, copy of post-trial 18-point presentencing motion that describes in detail the above documented sincere ignorance, conscientious stupidity, CRIMINAL perjury, CRIMINAL cover up and CRIMINAL malfeasance in office of all involved that I sent you, Judge Bruce Colyer, on the 9th day of February, 2004

2.    A copy of a 9 page letter I sent you, Judge Colyer, dated Thursday February 12, 2004 before sentencing exposing the criminal perjury.  The letter includes:

b.    Copy of the PRETRIAL MOTION, dated September 14, 2003, requesting exculpable evidence[2] that were unconstitutionally denied under you're the sincere ignorance, conscientious stupidity, malice and corruption of your order.

c.    Copies of the NHTSA 2002 Cover page, "Procedures for Walk-and-Turn Testing" - section on 4 confirming the 2" heel condition, acquired after trial from other sources that were unconstitutionally denied under your sincere ignorance, conscientious stupidity, malice and corruption of your order. (Cover and pages VIII9 – VIII11)

d.    Copies of the NHTSA 2002 "Procedures for One-Leg-Stand Testing" section on 4 confirming the 2" heel condition, acquired after trial from other sources that were unconstitutionally denied under your sincere ignorance, conscientious stupidity, malice and corruption of your order. (Cover and pages VIII12 – VIII14)

4.    Copy of the receipt for "Personal Property Taken" signed by Officer Little and the petitioner affirming that "boots" were taken off the petitioner at lock up on 5/17/03.

5.    Copies of the trial transcript confirming the false conviction at trial by way of:

a.    Cover Page of the certified trial transcript and index (2 pages)

b.    Alex Little's (Officer Badge #920) perjured[3] testimony regarding the testing procedures heel issue, based on the denied requests for exculpable evidence made pretrial that should have been known by the prosecution and the police officer because it had been highlighted by the constitutional PRETRIAL MOTIONS requesting exculpable evidence that were unconstitutionally denied under your sincere ignorance, conscientious stupidity, malice and corruption of your order (page 85).

c.    Copies of the trial transcript confirming the perjured[4] testimony of "huffing and puffing" based on the sworn conflicting police statements of Tim Taylor (Officer Badge #913) that should have been known by the prosecution (Pages 119-121).

6.    A listing of the actions taken by the petitioner starting in 2004 and still ongoing to expose your sincere ignorance, conscientious stupidity, malice and corruption.

Thank you in advance.

"Time is of the essence"

Motion to overturn the Verdict in favor of the Defendant

The testimony by the State's witnesses was in some cases
Wholly inaccurate, wantonly and unashamedly prejudicial without foundation, conflicting and borderline perjurious.
1.  Comes now the defendant to state his case and ask the court to overturn the verdict in favor of the defendant.  The defendant asks for a new verdict of innocent in his favor and without prejudice or limitation to all issues of guilt that were and are related to this case.

2.  Officer Little under direct cross examination gave inaccurate testimony in front of the jury.  He repeatedly stated while under oath that it was a 4" heel not the 2" heel that required notification and opportunity for the removal of said shoes prior to taking of both the Walk and Turn and the One Leg Stand field sobriety tests.

3.  I submit that the National Highway and Safety Administration standard requires "individuals wearing heels more than two inches high should be given the opportunity to remove their shoes."

4.  This as a fact is indisputably a part of the National Highway and Safety Administration Standard.

5.  This I submit was known by officer Little or should have been known by any officer having more 50 hours National Highway and Safety Administration Standardized Field Sobriety Testing training within the last 24 months.

7.  Without a credibly admiistered complete Field Sobriety Test the States case rest on nothing. They presented no other evidence of the Defendant's intoxication, there for the verdict in the case should be overturned without prejudice.  The state misrepresented either through malice of forethought or ignorance either way their prosecution was based on misinformation and not factual evidence.

8.  As an officer of the court, Officer Little should be held to a higher standard as a professional presuming to give professional reliable testimony in a court of law under oath.

9.  Officer Little failed that test in that he repeatedly asserted inaccurate testimony either through knowing deception or an unacceptable level of ignorance.

11. When asked had the Defendant blown (a steady tone) for 15-16 seconds during the test administered in regard to this issue, Officer Taylor 913 repeatedly offered testimony conflicting with his Supplemental report signed by T. Taylor 913 on each page of the two page report and dated 5/18/03.

12. This sworn testimony was prejudicial in front of the jury.  The defendant repeatedly asked Officer Taylor 913 to confirm that the defendant had blown for 15 seconds and he repeatedly refused to confirm his signed and approved Supplemental Report dated 5/18/04.

13. Without Officer Taylor's denial of his previous report, the state has no evidence of a refusal.  The defendant clearly blew 15-16 seconds per officer Taylor's singed and approved report dated 5/18/03 just after the incident and the State's own representative from the State's Division of Health, Breath Alcohol Department testified that a 15 second blow fell to the upper end of the credible range she reported as 7-17 seconds for the average blow.

14. In that Officer Taylor 913 had in effect sworn to the facts in his Supplemental Report and then contradicted said report again in Sworn Testimony in front of the jury his action are borderline perjurious.  And the evidence he provided was therefore suspect and without foundation.

15. As an officer of the court, Officer Taylor 913 should be held to a higher standard as a professional presuming to give professional reliable testimony in a court of law under oath.

16. In that the defense had no way of knowing in advance that the prosecution was going to purport misinformation and what can be construed as outright lies or contradictions of previously reported facts the defendant can not be held to a verdict based on a false prosecution.  Therefore the defendant requests the court enter a verdict in favor the defendant's innocents without prejudice or limitation on the issue and all matters related to this issue.

17. In a closely consider case on which the jury ponder for considerable amount of time, this wantonly and unashamedly prejudicial conduct had a deleterious effect on the defendant's case and therefore I ask that you to take judicial exception to the verdict and issue a verdict of innocents in the defendant's favor.

18. Because of the above referenced unreliable and potentially criminal, wantonly and unashamedly prejudicial testimony of the state's sworn officers of the court in front of the jury hearing the case, I here by ask that the court take judicial exception to the verdict and render a new verdict of innocents without limitation in the defendants favor including all issues and connected issues that were and are related to this issue before the court.
Dated this 9th day of February, 2004
David G. Jeep
16359D Lakefield Place
Grover, MO 63040

The above is a digital representation of the 18-point presentencing motion that was sent to Judge Colyer 9th day of February, 2004.  The signature of the petitioner below swears to this as fact! 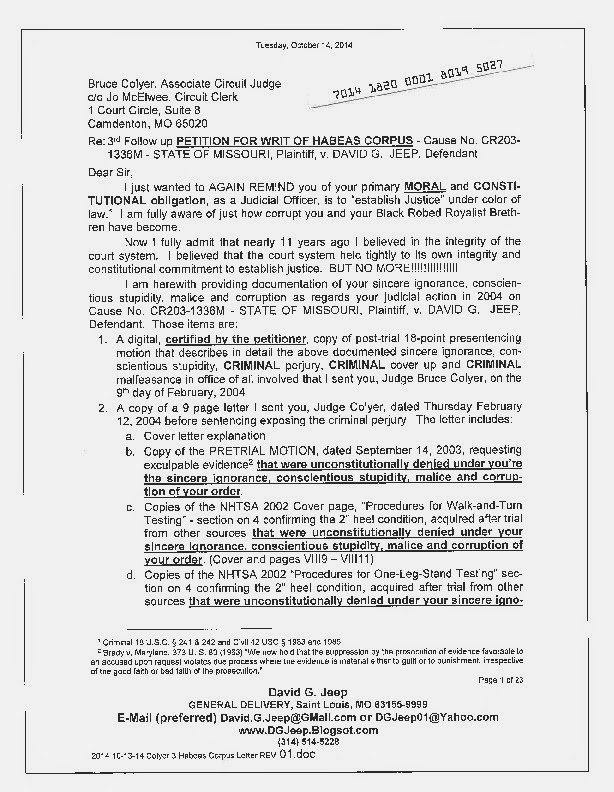 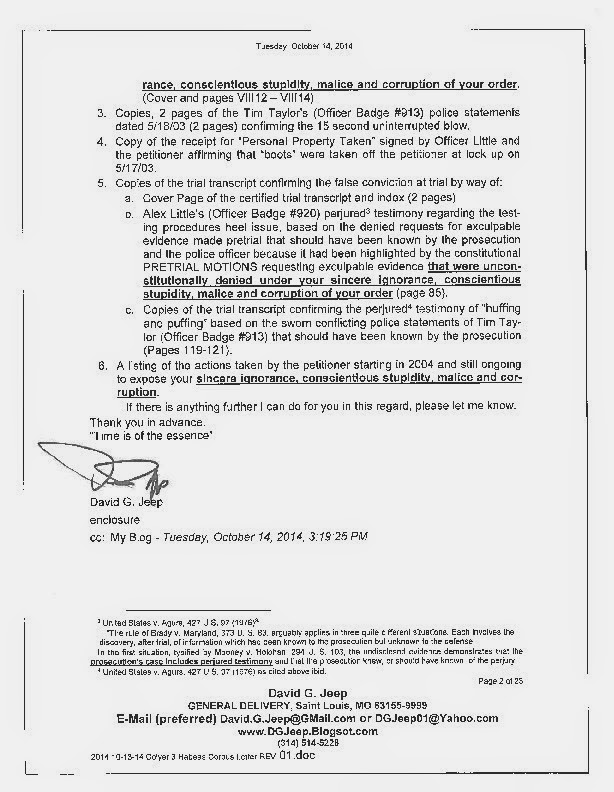 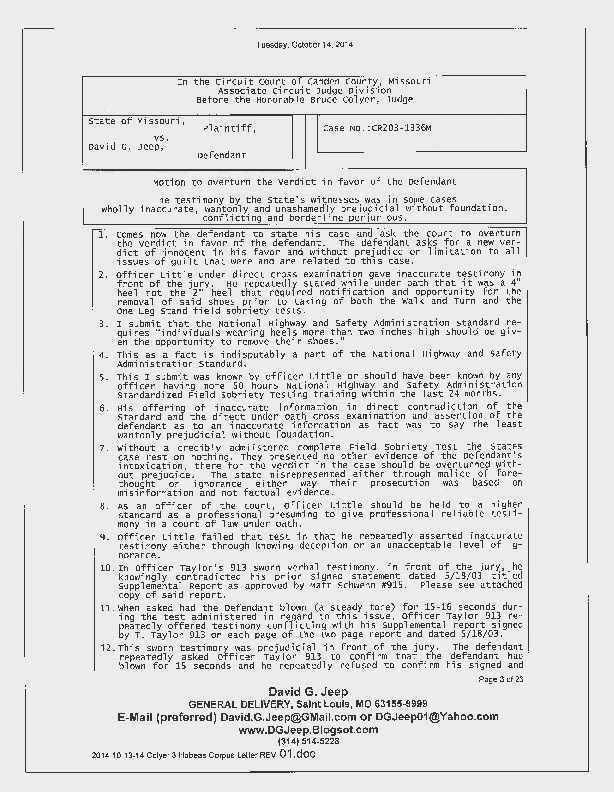 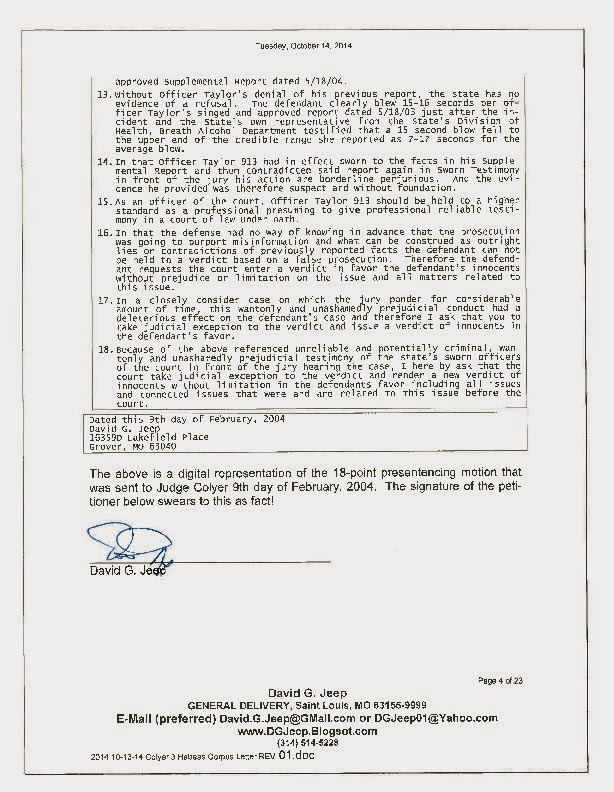 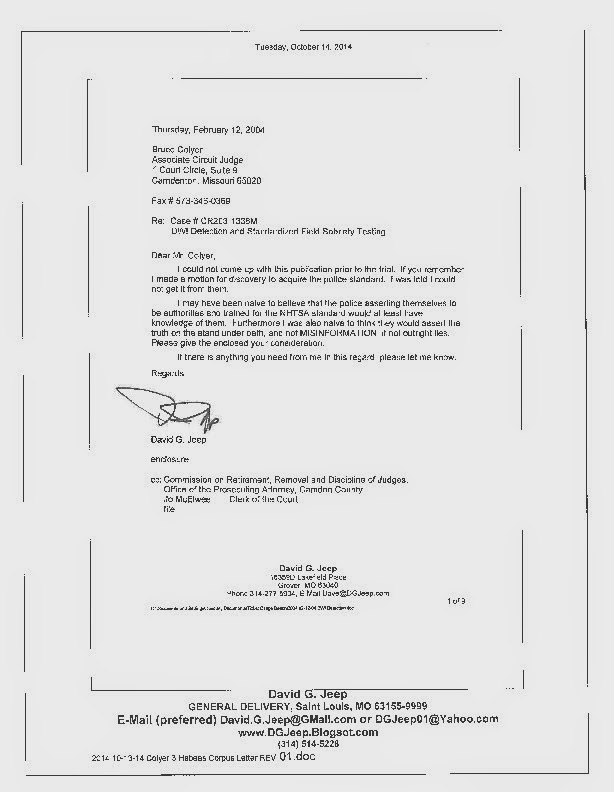 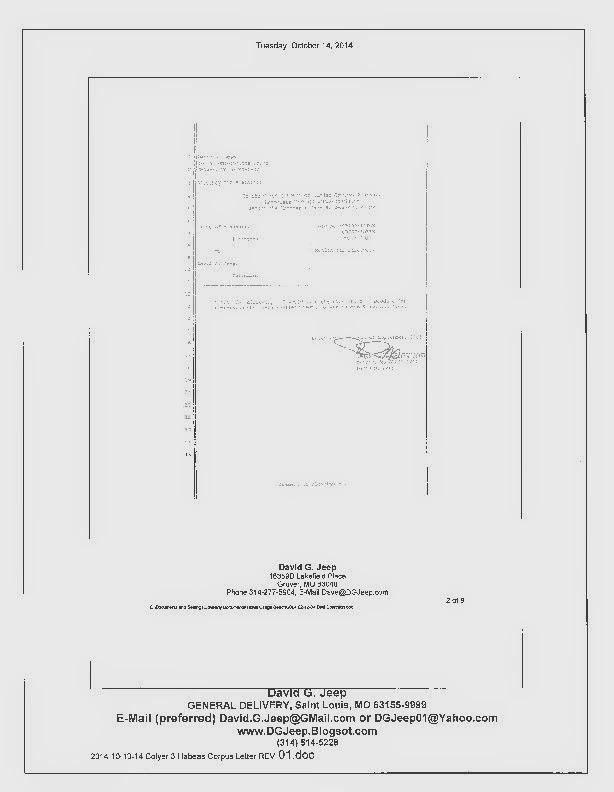 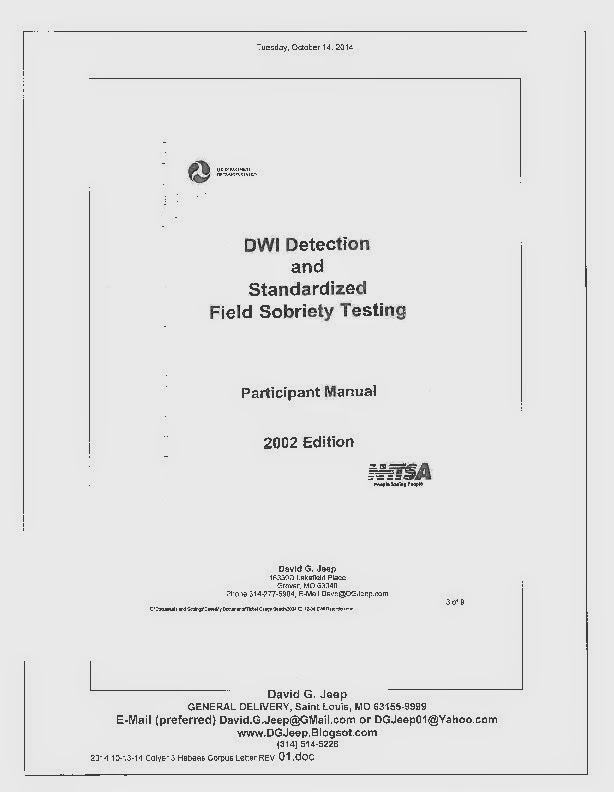 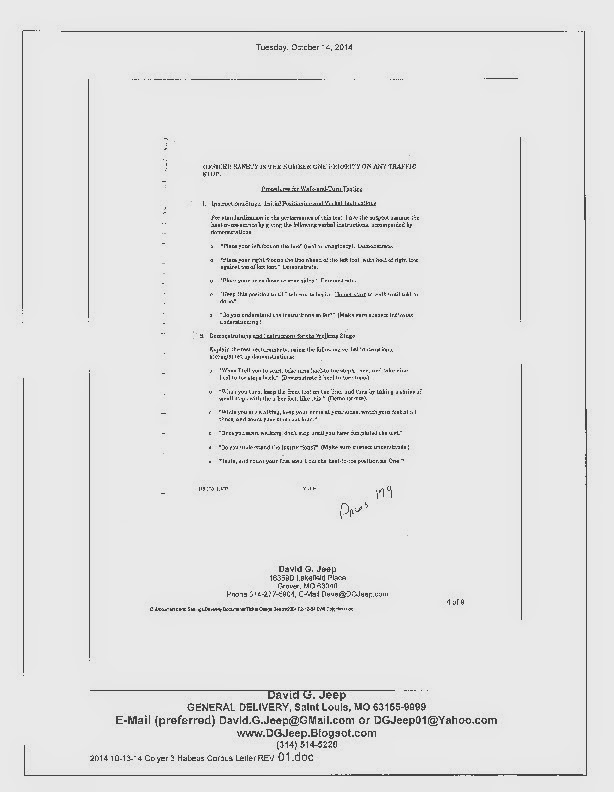 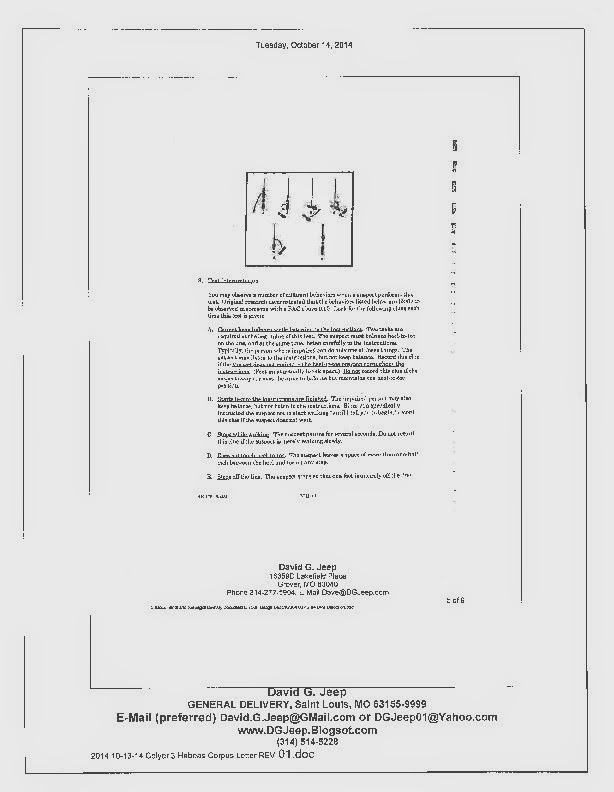 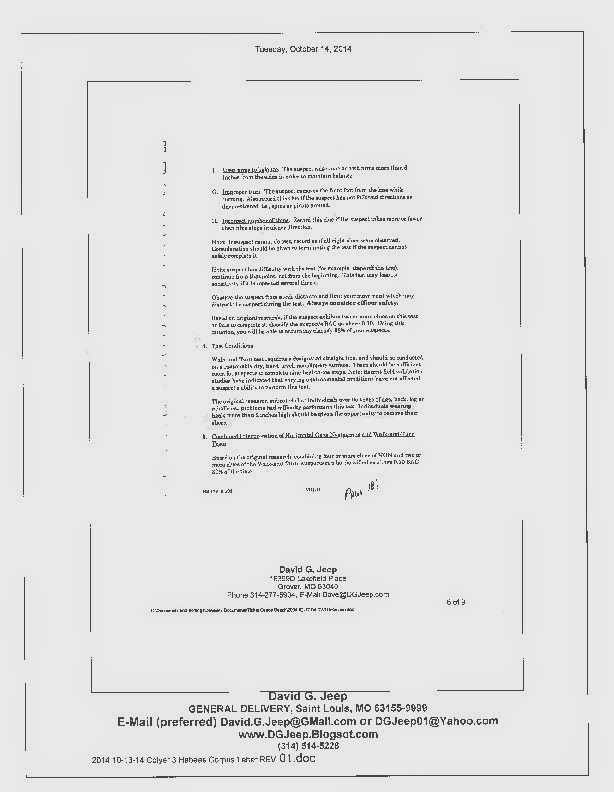 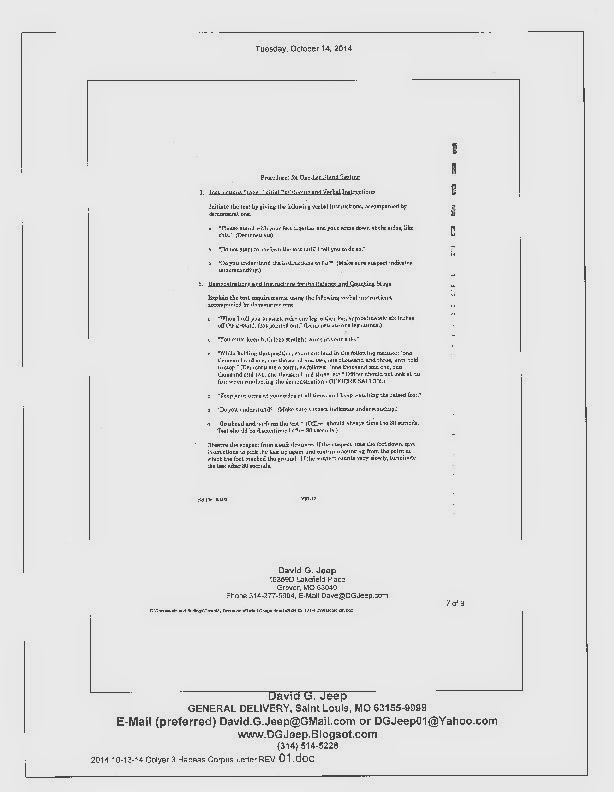 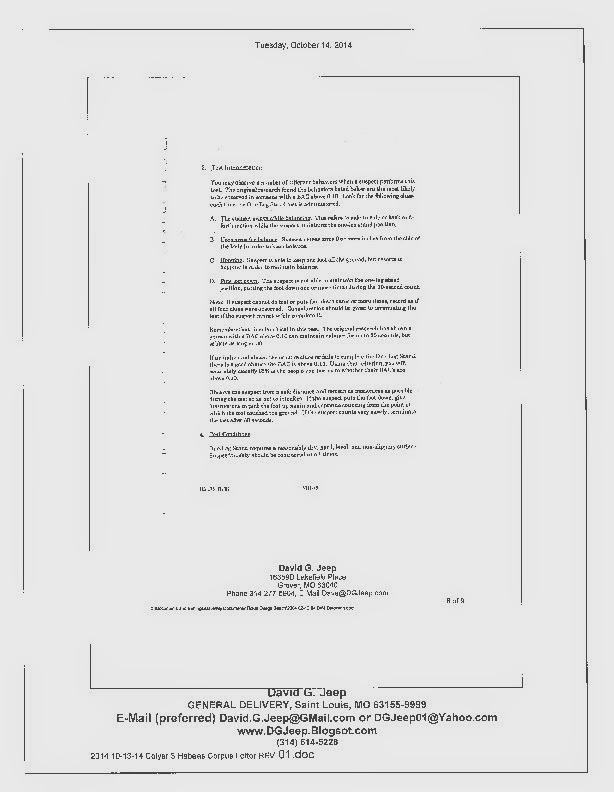 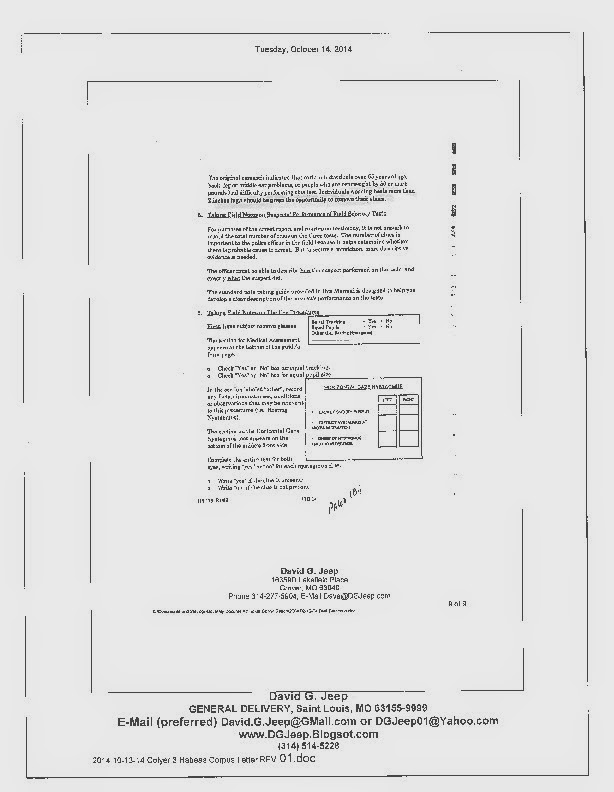 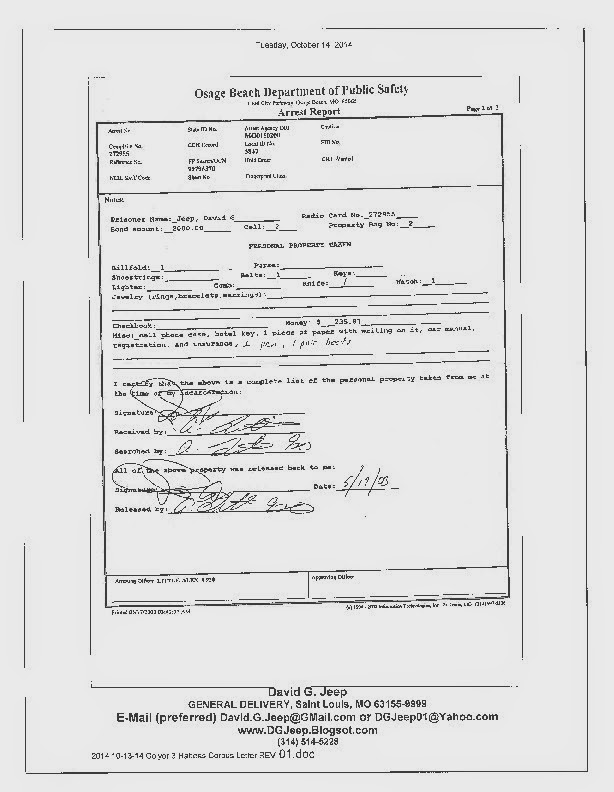 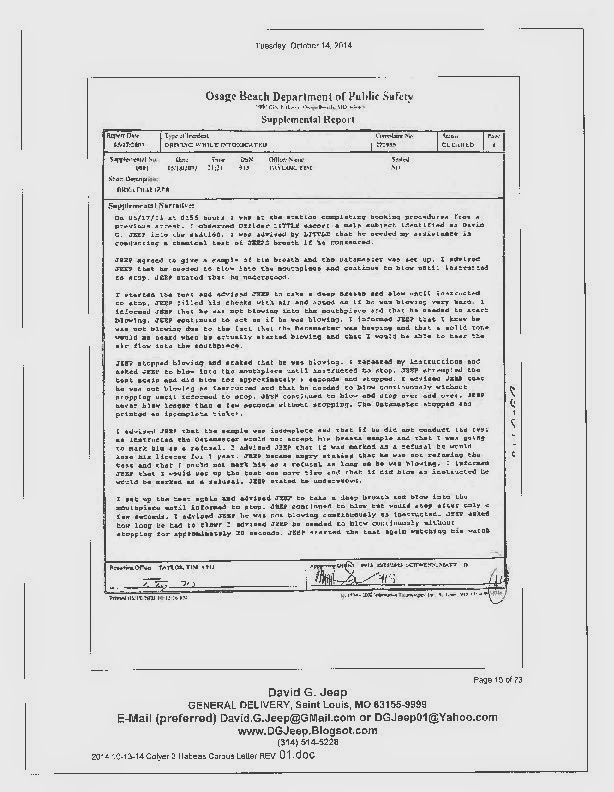 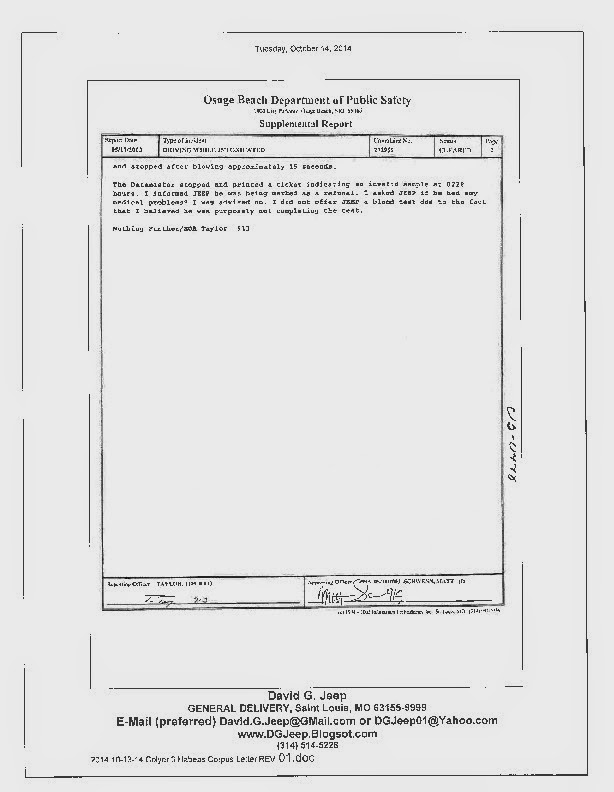 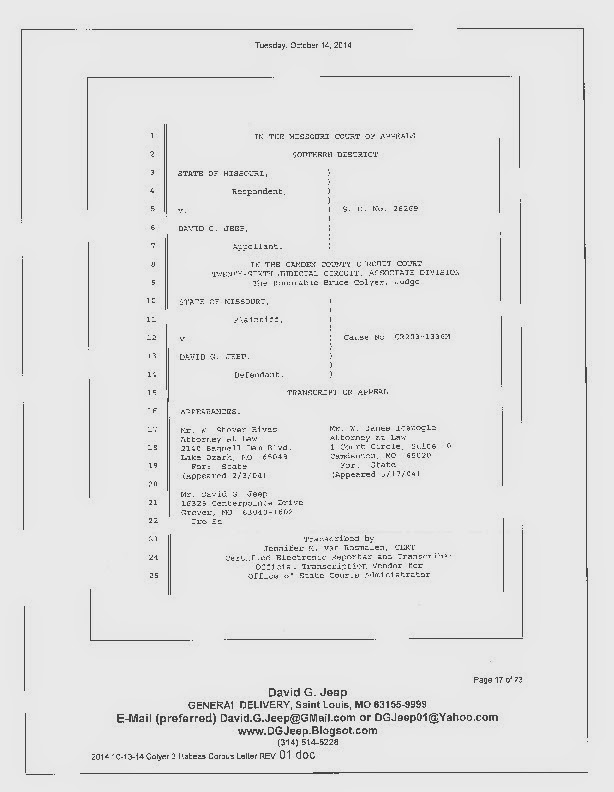 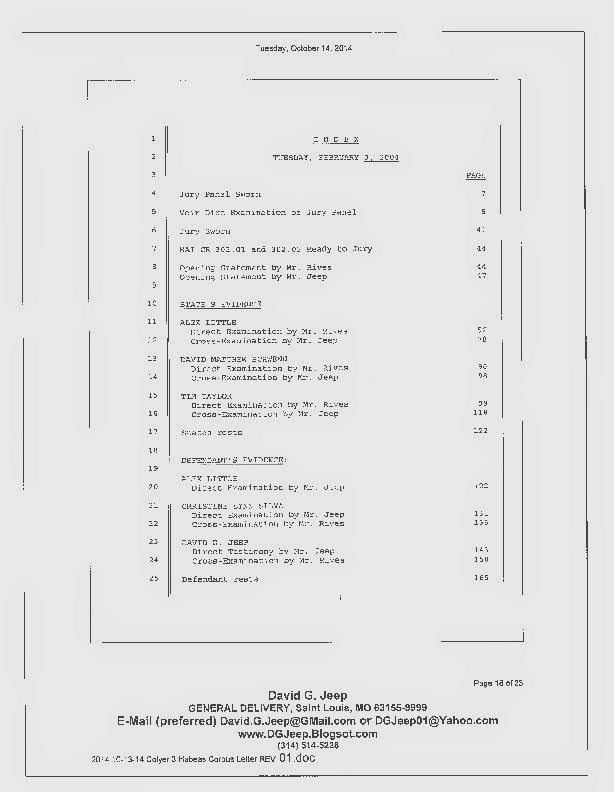 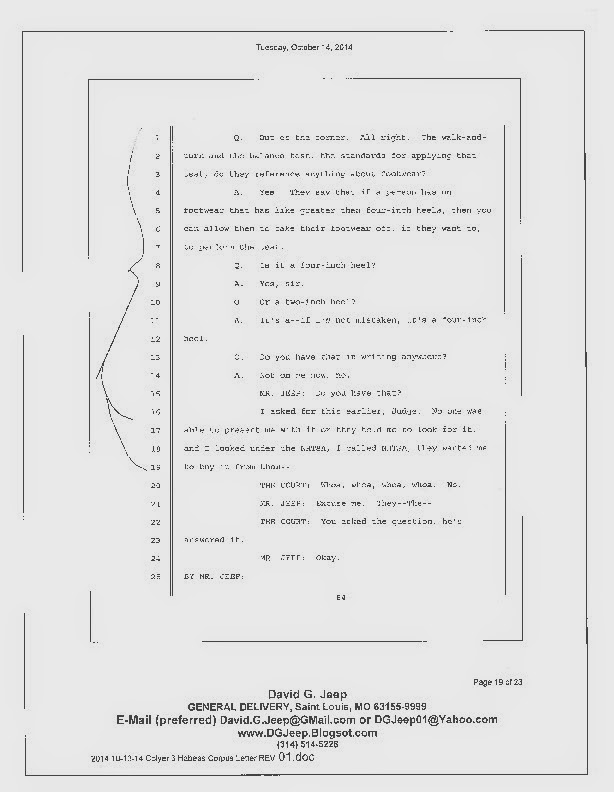 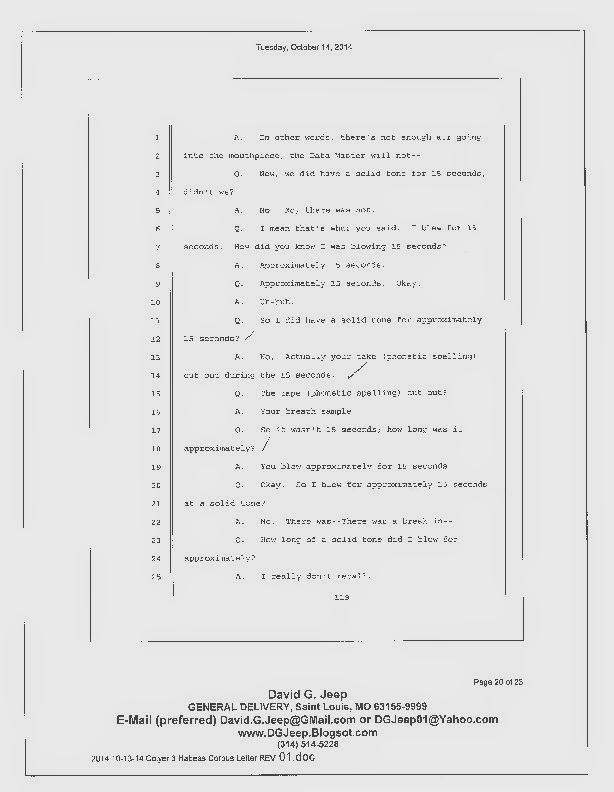 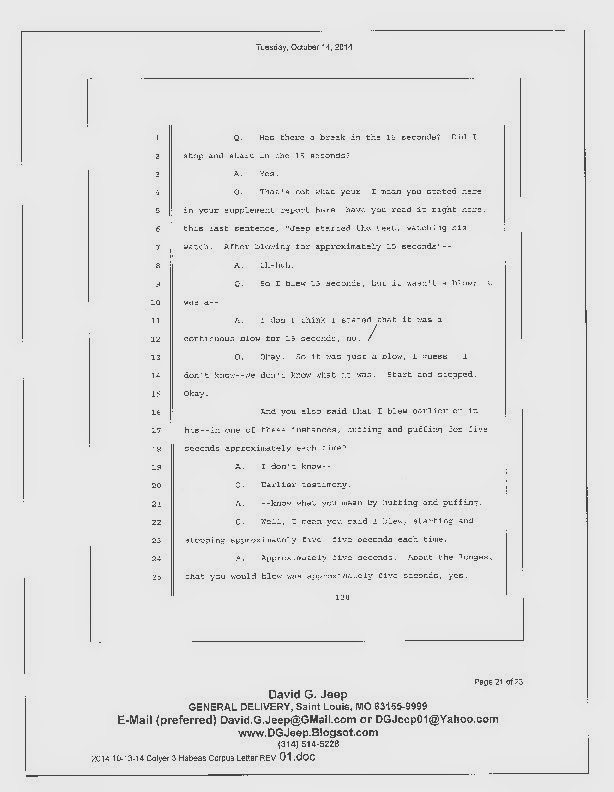 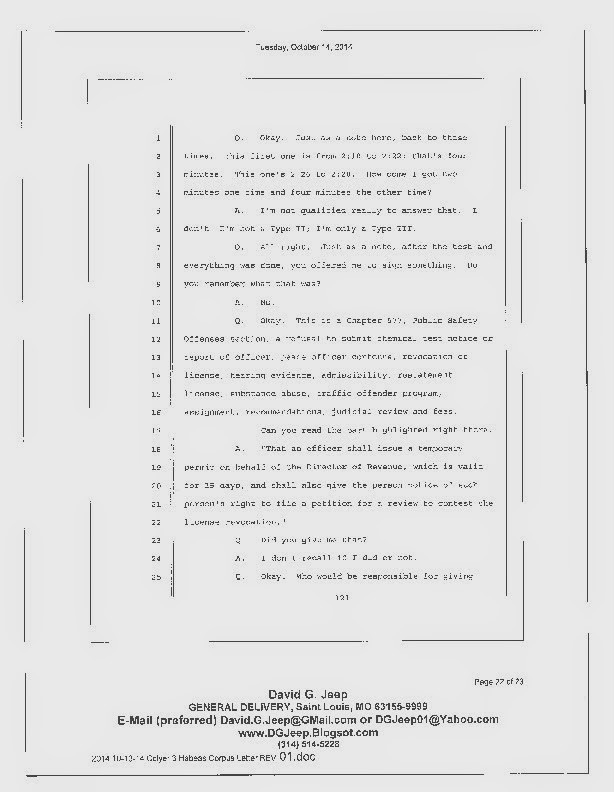 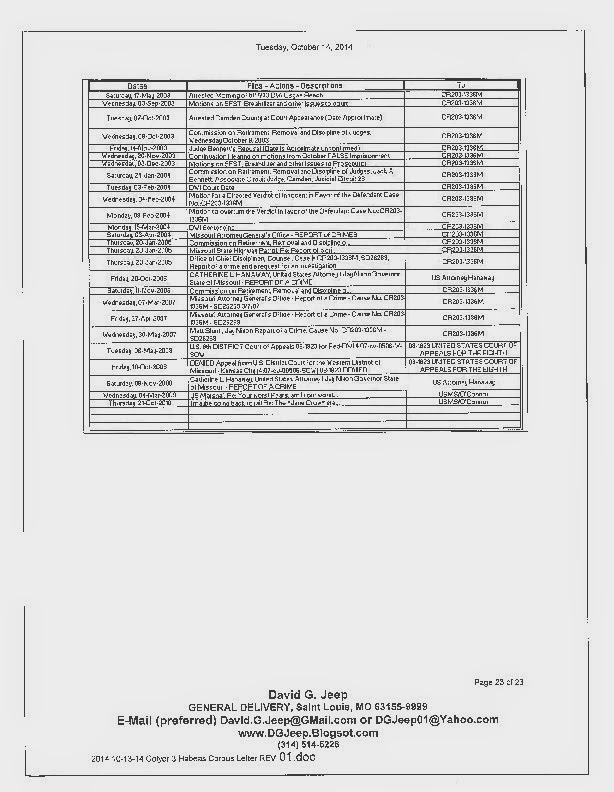 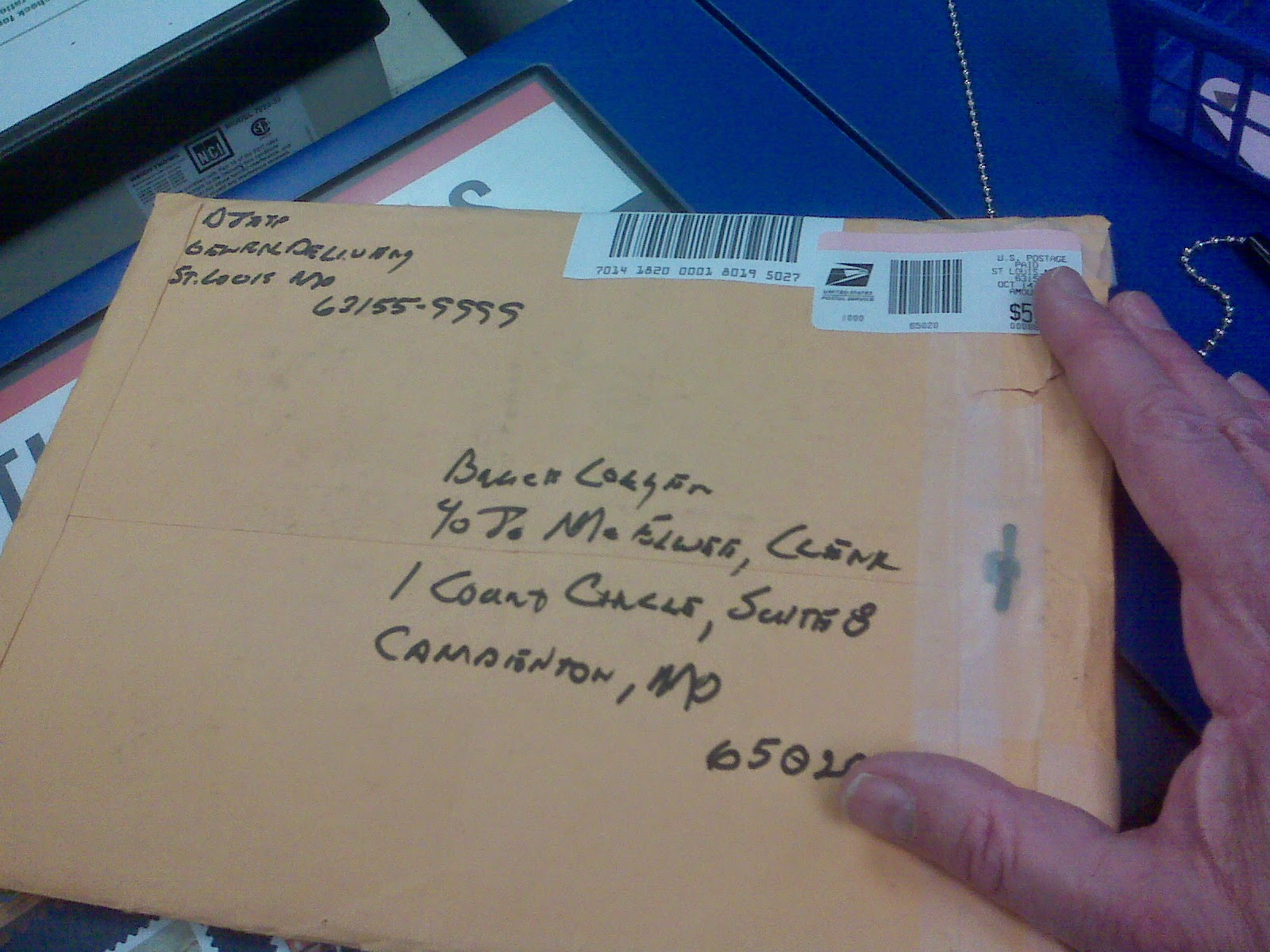 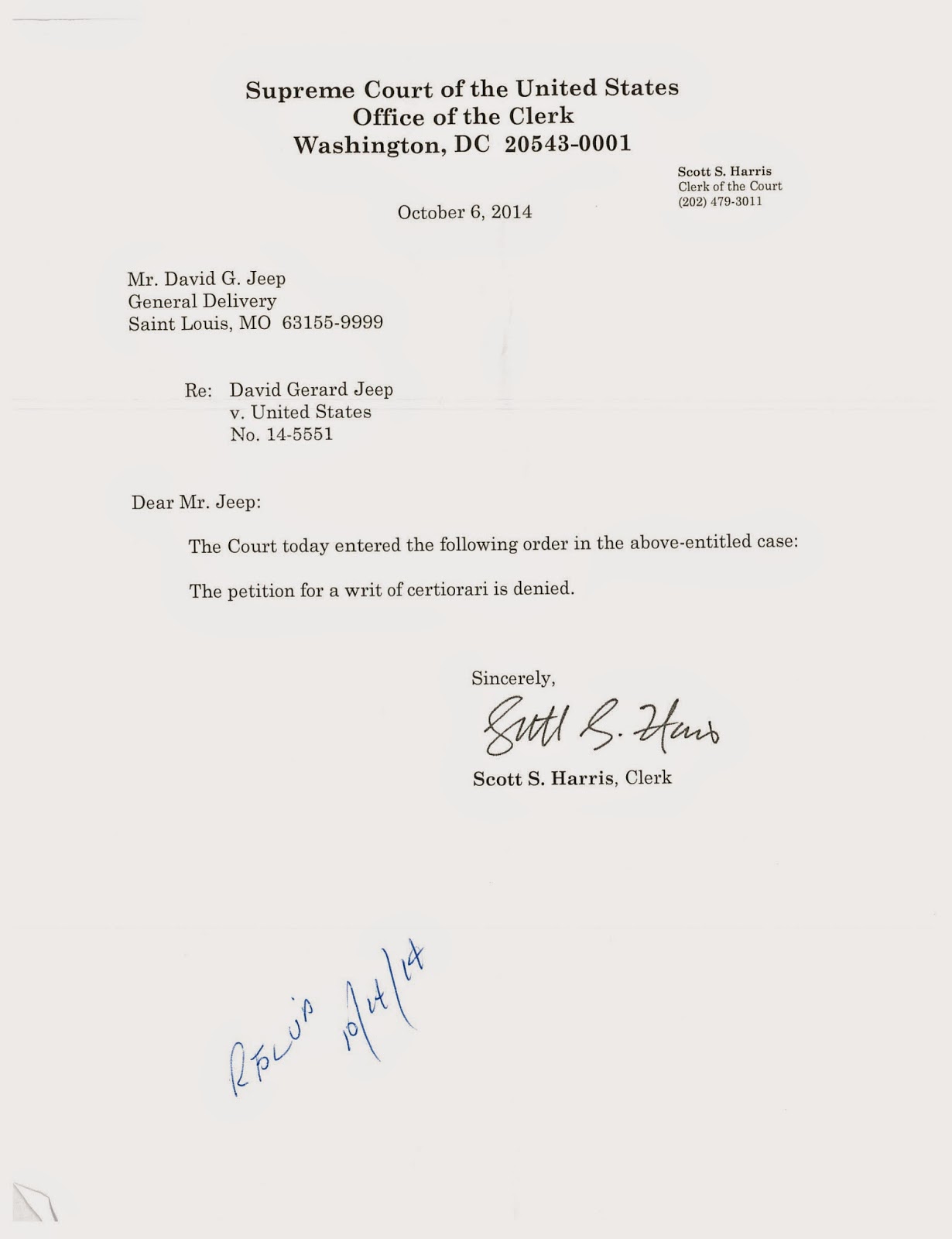