I realize no one has any accountability.  Everyone has ABSOLUTE IMMUNITY for the inherent incompetence and corruption of justice.   Judicial independence has become blind obedience to the self-serving corruption of We the People's constitutional intent to "establish justice" and "secure the Blessings of Liberty to ourselves and our Posterity" with the Supreme Court's quashing of rights with corrupt assertion of absolute immunity for the "malicious or corrupt" judges,[1] the "malicious or dishonest" prosecutor, [2] the "knowingly false testimony by police officers"[3] and "all (malicious, corrupt, dishonest and incompetent[4]) persons -- governmental or otherwise -- who were integral parts of the judicial process" [5] acting under color of law to wit, ABSOLUTE CORRUPTION.[6]
But has E. Richard Webber responded at all to the above referenced issue filed February 22, 2013 (47 day ago)?

I know it is impossible to embarrass the CORRUPT justice sytem, but I enclose for the sake of JUSTICE another copy of the FRAUDULENT petition, that became the fraudulent ex-parte order of protection, dated November 3, 2003. 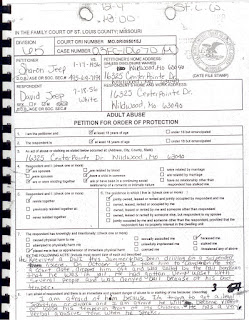 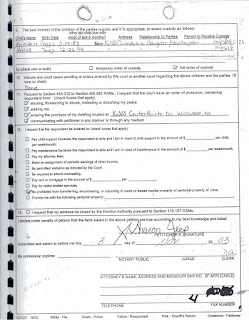 [1] Bradley v. Fisher, supra, 80 U. S. 335, 80 U. S. 349, note, at 80 U. S. 350, Pierson v. Ray, 386 U. S. 57 (1967) Judicial ABSOLUTE IMMUNITY is based on a skewed reading, overlooking the noted exception that absolute ANYTHING creates, of Lord Coke, Floyd and Barker (1607) ruling from an acknowledged CORRUPT court, the Star Chamber.
[2] Imbler v. Pachtman, 424 U. S. 428 (1976) Prosecutorial ABSOLUTE IMMUNITY
[3] Briscoe v. LaHue, 460 U.S. 345 (1983) Police ABSOLUTE IMMUNITY
[4] Incompetence is the most insidious and it is covered up by the gratuitous grant of malice, corruption and dishonesty!!!!
[5] Briscoe v. LaHue, 460 U.S. 345 (1983) ABSOLUTE IMMUNITY for "all persons -- governmental or otherwise -- who were integral parts of the judicial process"
[6] "Power tends to corrupt, and absolute power corrupts absolutely. Great men are almost always bad men, even when they exercise influence and not authority, still more when you superadd the tendency or the certainty of corruption by authority. There is no worse heresy than that the office sanctifies the holder of it." Lord Acton in a letter he wrote to scholar and ecclesiastic Mandell Creighton, dated April 1887.