If the life-time-tenure of the Article III judiciary was intended for anything it was intended to empower a SUA SPONTE remedy for any injustice before them.... Not compulsorily empower and/or cover-up theirs and their peers injustices.

Re: Appeal 15-1057 David G. Jeep vs. Government of the United States of SUA SPONTE RE-CONSIDERATION IN APPELLATE REVIEW

There are none so blind as those that refuse to see… If ever there was a more sincerely ignorant or conscientiously stupid statement than… "This immunity applies even when the judge is accused of acting maliciously and corruptly, and it "is not for the protection or benefit of a malicious or corrupt judge, but for the benefit of the public, whose interest it is that the judges should be at liberty to exercise their functions with independence and without fear of consequences." (Scott v. Stansfield, L.R. 3 Ex. 220, 223 (1868), quoted in Bradley v. Fisher, supra, 80 U. S. 349, note, at 80 U. S. 350.)"  Pierson v. Ray, 386 U.S. 554 (1967); I cannot imagine it.

Why have a justice system at all if, AT THE FOUNDATION, you are going to tolerate malice, corruption, sincere ignorance and conscientious stupidity without consequence??  I realize the judiciary placates its conscientious by saying "errors may be corrected on appeal," but that is only if the VICTIM of fraud and abuse of power has the money, the ability, the time and most importantly the LUCK to instigate and sustain an appeal.  Because as the unquestioned evidence in my case shows THE APPEAL SYSTEM IS JUST AS MALICIOUS, CORRUPT, SINCERELY IGNORANT AND CONSCIENTIOUSLY STUPID in support of their brethren in the Black Robed Royalist Guild of Judges.

EVERYTHING emanating from this system has to be SUSPECT, because malice, corruption, incompetence, sincere ignorance and conscientious stupidity infects it from the beginning to the end.

I.
ANY assertion of personal ABSOLUTE IMMUNITY, without proof of divinity, is a fraud by any standard of Justice in a government/civilization of free and equal persons on THIS PLANET!!!!![1]

ANY assertion of governmental ABSOLUTE IMMUNITY, acknowledging human fallibility, is repugnant to a government/civilization of the people, by the people and for the people on THIS PLANET!!!!! [2]

In the age of Article III blind-eye affirmation of malice, corruption,[3] "sincere Ignorance and conscientious stupidity"[4] I ask for reconsideration based on the specific protection of the above referenced statute:

"On the hearing of any appeal or writ of certiorari in any case, the court shall give judgment after an examination of the record without regard to errors or defects which do not affect the substantial rights of the parties."

The Circuit court has declined to absolutely deny jurisdiction, therefor the only question is does the "petition" have merit?

There is no certified RECORD to consider, with the District court's self-serving obstructionism and the admittedly non-professional, pro se, indigent, prone to "harmless error," limited abilities of the petitioner.

Even though the facts asserted are unquestioned and the damages resultant from the facts are similarly unquestioned. The District court says in its December 11, 2014 "ORDER":

"The nature and tone of the allegations demonstrate that plaintiff's purpose is to harass the named defendants rather than vindicate a cognizable legal right."

What the District court calls harassment is to the petitioner JUSTICE with compensatory, admittedly treble, damages for an admittedly "thick skulled"[5] victim of 11.89 years[6] of court sanctioned fraus omnia corrumpit.

How are IV, V and XIV Amendment rights to the most basic elements of Due Process of Law,[7] - probable cause,[8] a credible "presentment" of the charge[9] and exculpable evidence[10] not "cognizable legal right(s)"?

The District Court Judge Jean C. Hamilton is inserting an uninformed emotional opinion of the petitioner's allegations without the constitutionally required benefit of Due Process.  Rereading the "ORDER" I thought of a similar dismissal of Ida B. Wells' suit for being dragged out of the railroad car by the conductor and two men i.e., forcible removal from a train where she had purchased a "first-class" ticket, 71 years before the activist Rosa Parks showed preplanned, protected and STAGED resistance on a bus:

"We think it is evident that the purpose of the defendant in error was to harass with a view to this suit, and that her persistence was not in good faith to obtain a comfortable seat for the short ride."[13]

It was too unconstitutionally easy for the for the Supreme Court with the Civil Rights Cases, 109 U.S. 34 (1883)[14] and the Tennessee Supreme Court to reverse the lower court's VII Amendment bicameral, judge and jury ruling in 1887.  Clearly the reversal in 1887 and the December 11, 2014 dismissal by the District Court attempt to abolish the Constitutional authority of the VII Amendment's bicameral, judge and jury remedy:

"In Suits at common law, where the value in controversy shall exceed twenty dollars, the right of trial by jury shall be preserved, and no fact tried by a jury, shall be otherwise re-examined in any Court of the United States, than according to the rules of the common law."

The Tennessee Supreme Court in 1887 over ruled the lower court's VII Amendment constitutional bicameral, judge and jury decision.  The Tennessee Supreme Court had only the might, NOT THE RIGHT, to do so.  The District Court today attempts to thwart the potential for a lower court's bicameral, judge and jury decision by asserting the "purpose is to harass."

The Founding Fathers were very aware of what an unrestrained judiciary could do, the history books of the day were replete with accounts of the "Star Chamber's" abuses and subsequent abolition as I noted in my original petition.  Elbridge Thomas Gerry, one of three member of the constitutional convention to withhold his approval did so because the constitution "establish(ed) a tribunal without juries, which will be a Star-Chamber as to Civil cases."  This was remedy by the VII Amendment.

If the life-time-tenure of the Article III judiciary was intended for anything it was intended to empower a SUA SPONTE remedy for any injustice before them.  Human beings, who all inevitably make mistakes, were to be empowered SUA SPONTE to remedy any injustice before them, without fear of retribution.  Not compulsorily empower and/or cover-up theirs and their peers injustices.

The "Star Chamber," as referenced earlier and well documented in English History, had shown unrestrained judicial power to have self-corrupting-results.  The RIGHT OF PETITION/APPEAL means nothing when the courts self-servingly, without affording access to trial or jury Due Process, conspire "before out of court"[17] that their brethren can do no wrong.

JUDGES CAN NOT ASSERT IMMUNITY FROM THE KNOWABLE[18] "SUPREME LAW OF THE LAND." 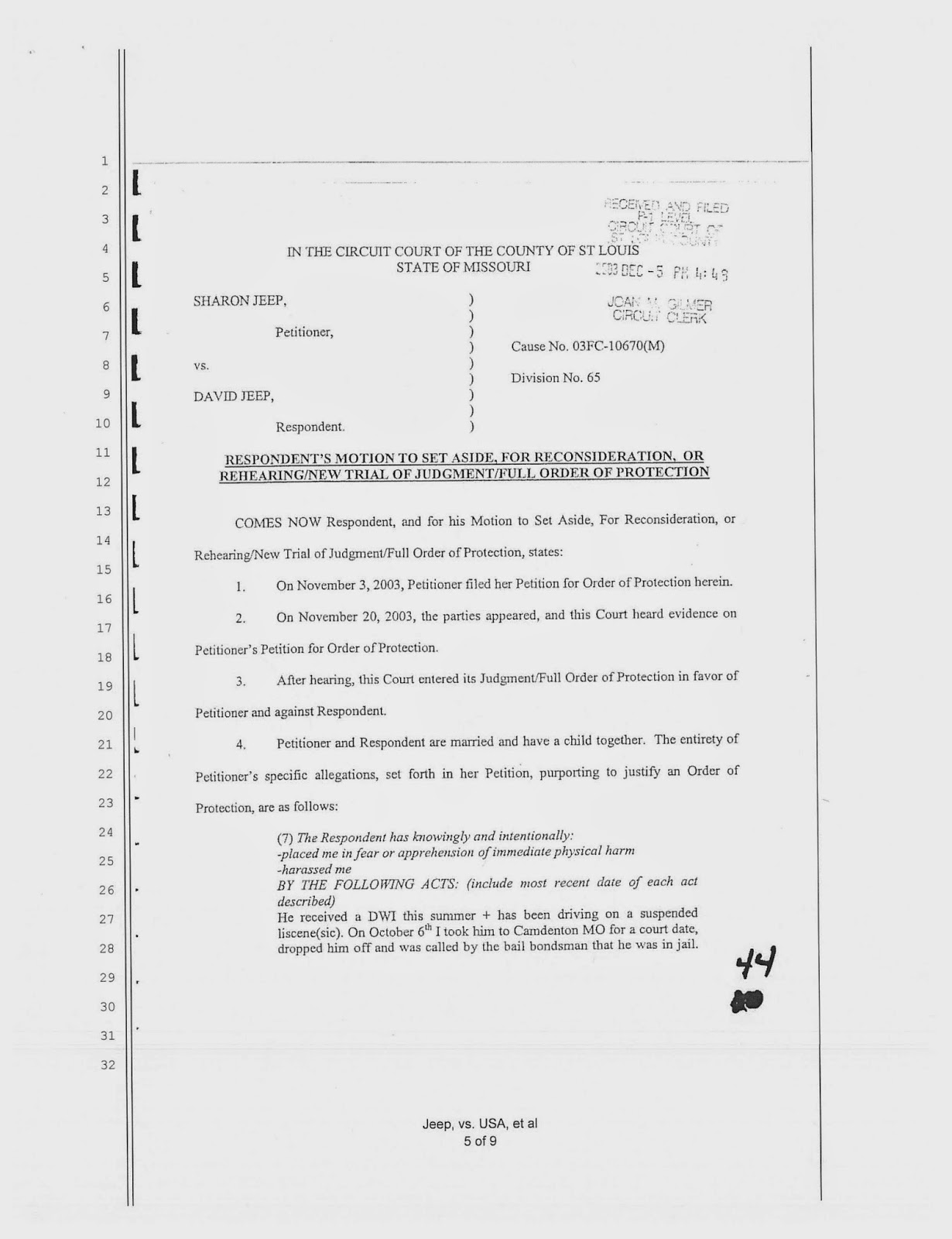 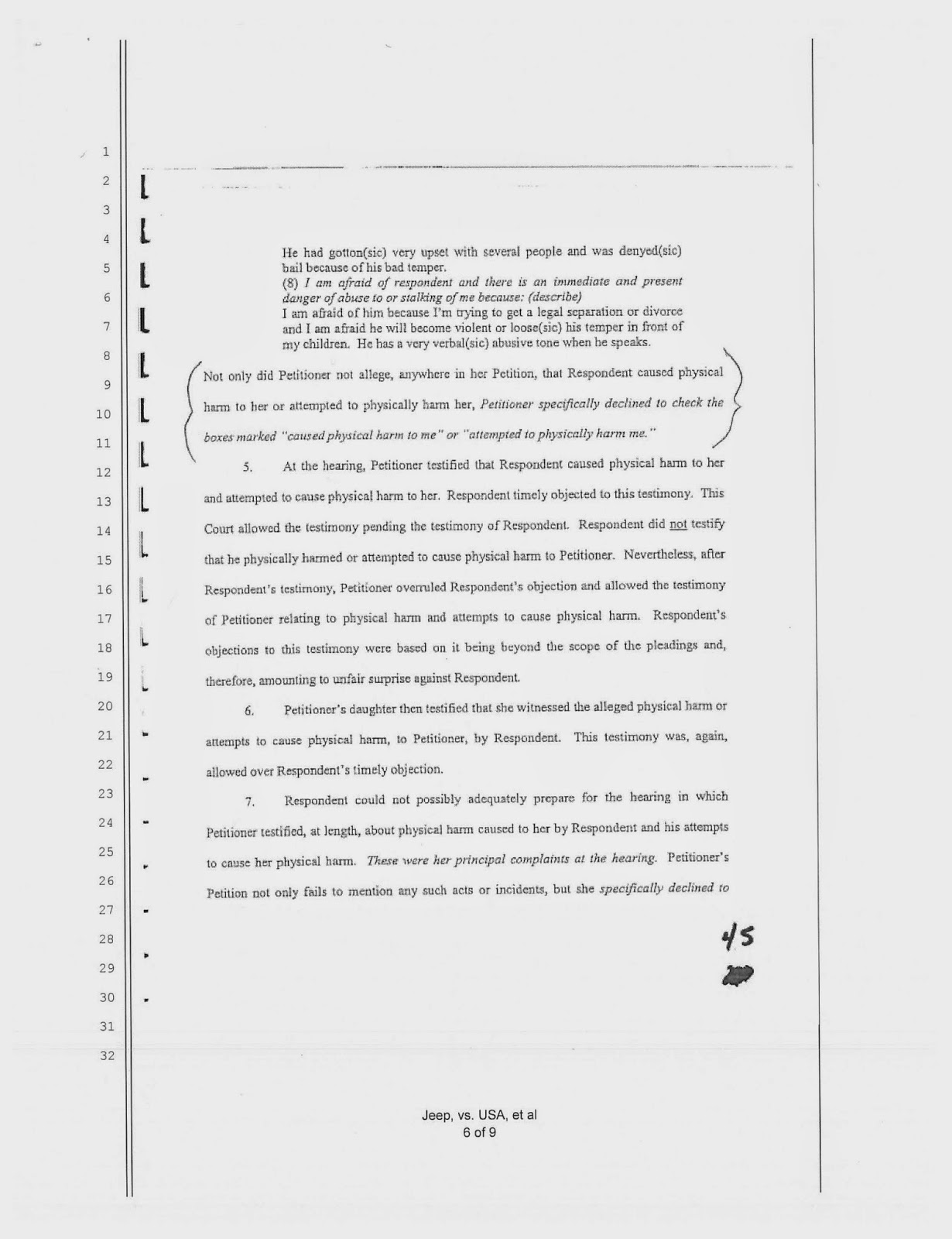 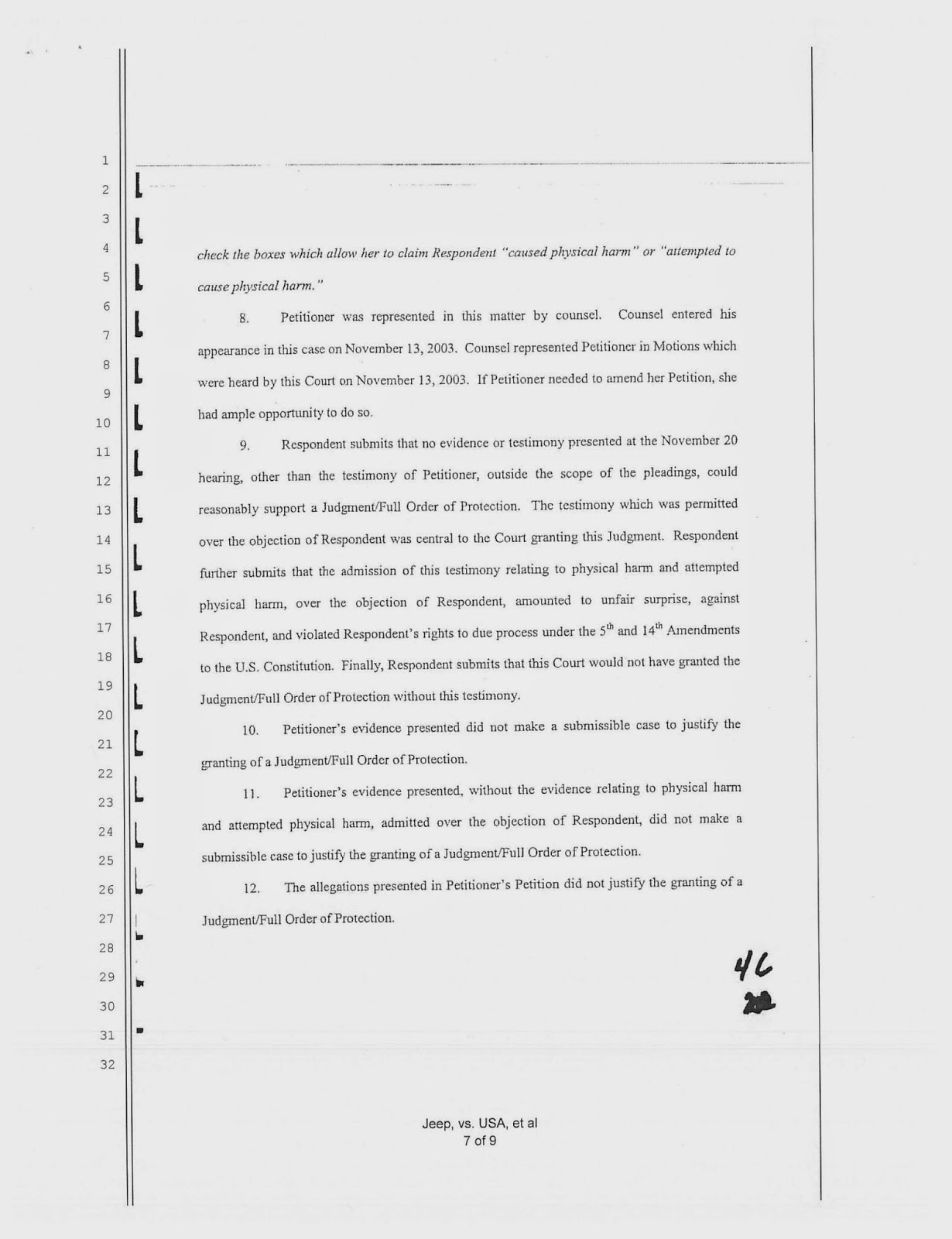 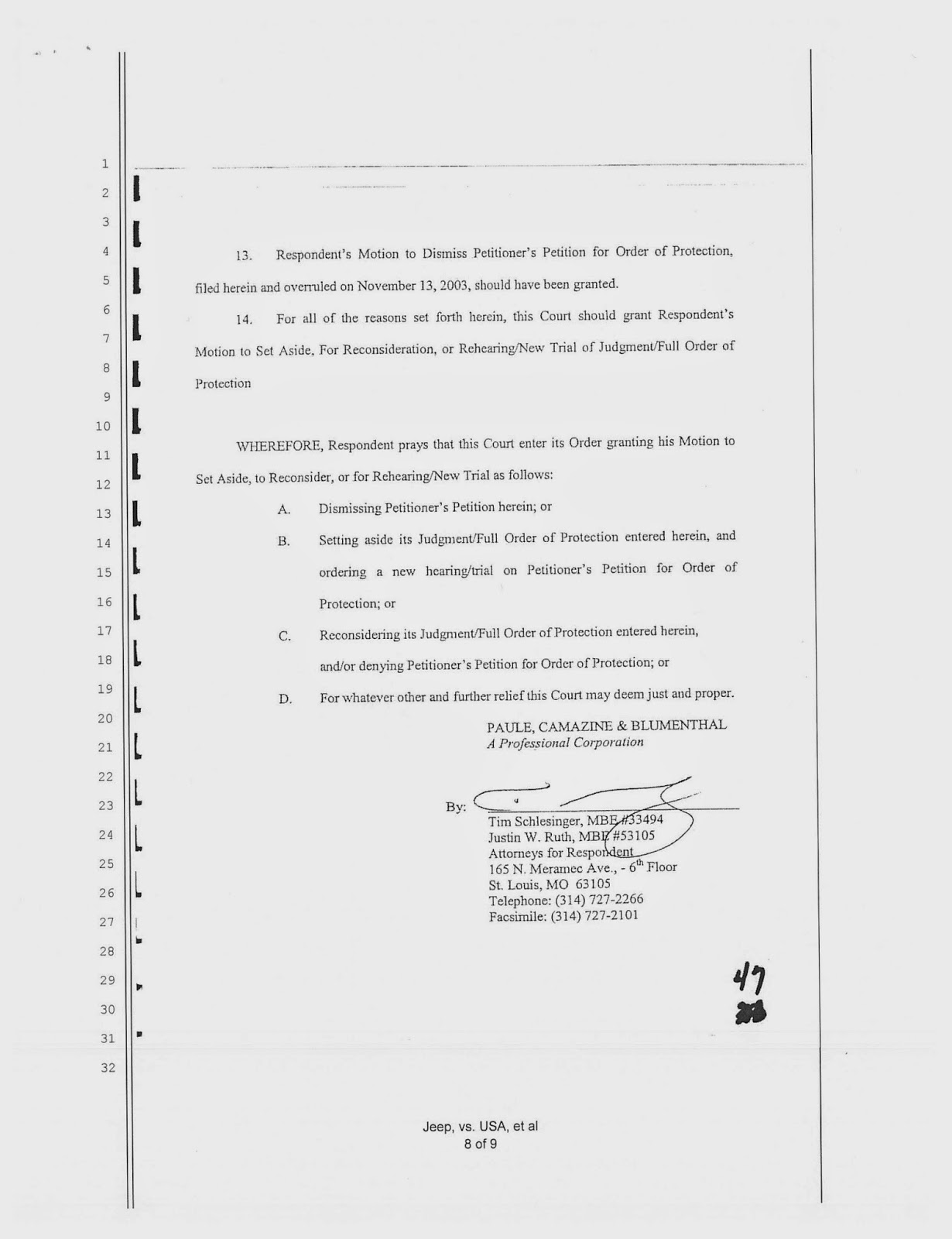 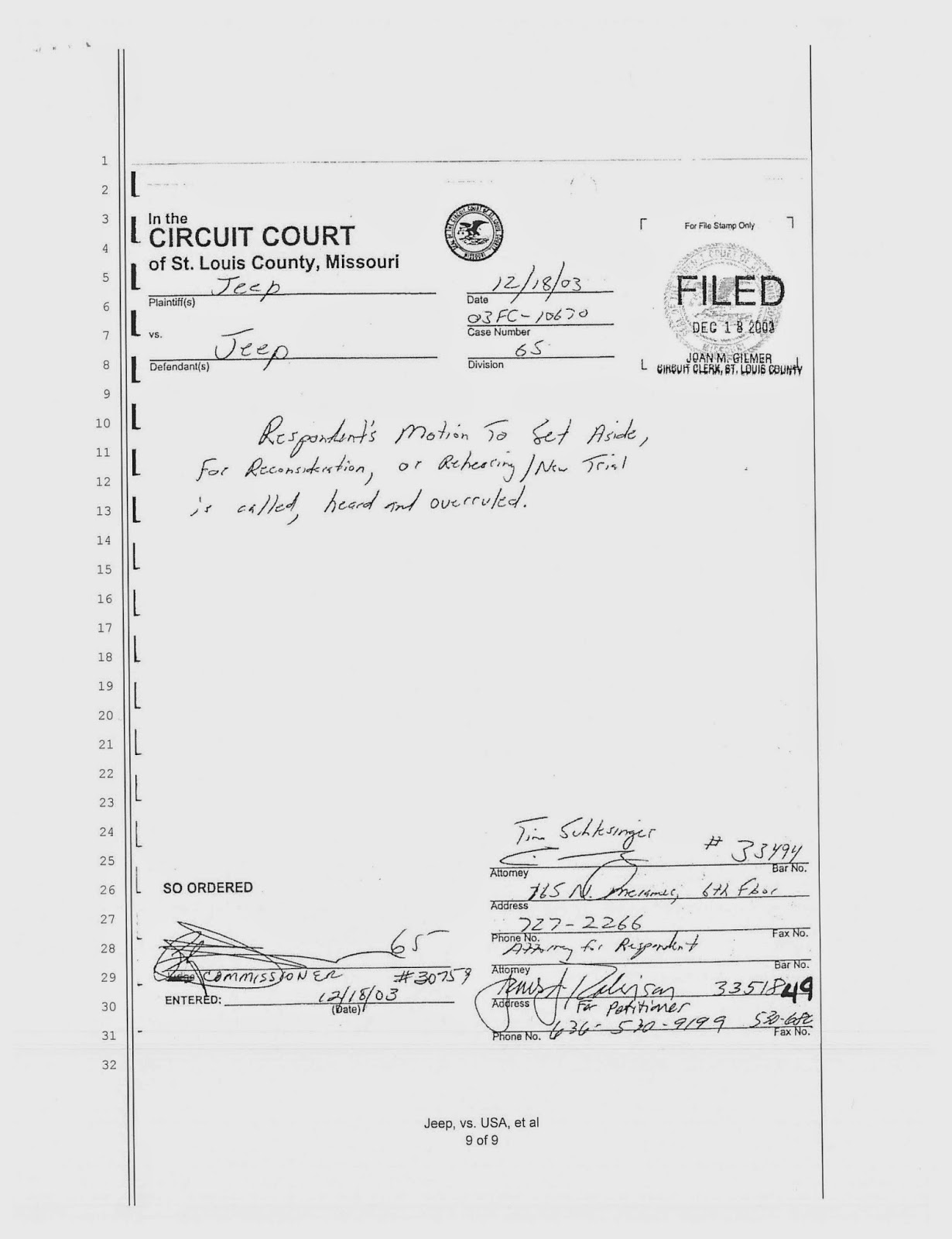 I declare under penalty of perjury that the foregoing is true and correct.
Signed this Monday, April 06, 2015
Signature of Plaintiff(s)

[1] DGJeep Wednesday, June 15, 2011 http://dgjeep.blogspot.com/2011/06/any-assertion-of-absolute-immunity.html
[2] DGJeep Wednesday, June 15, 2011 http://dgjeep.blogspot.com/2011/06/any-assertion-of-absolute-immunity.html
[3] "he should not have to fear that unsatisfied litigants may hound him with litigation charging malice or corruption. Imposing such a burden on judges would contribute not to principled and fearless decisionmaking, but to intimidation."" PIERSON V. RAY, 386 U. S. 553 (1967), Stump v. Sparkman, 435 U.S. 368 (1978)
[4] MLKing  "Nothing in the world is more dangerous than sincere ignorance and conscientious stupidity." ■Ch. 4 : Love in action, Sct. 3
[5] Thick - Thin Skull Rule Legal Definition: An additional exposure in tort liability towards persons who are particularly vulnerable or more fragile than the norm, who may have inherent weaknesses or a pre-existing vulnerability or condition; the tort-feasor takes his victim as he finds them; he compensates for all damages he caused, even if damages are elevated compared to a norm because the plaintiff was thin skulled.
[6] Based on Saturday April 04, 2015 - 03:56:05.18 PM
[7] 5th and 14th Amendments
[8] 4th Amendment "The right of the people to be secure in their persons, houses, papers, and effects, against unreasonable searches and seizures, shall not be violated, and no warrants shall issue, but upon probable cause, supported by oath or affirmation, and particularly describing the place to be searched, and the persons or things to be seized."
[9] AMENDMENT V No person shall be held to answer for a capital, or otherwise infamous crime, unless on a presentment
[10] Brady v. Maryland, 373 U. S. 83 and specifically in unconstitutional UNRELATED DWI convisction United States v. Agurs, 427 U.S. 103 (1976) See specifically "The rule of Brady v. Maryland, 373 U. S. 83, arguably applies in three quite different situations. Each involves the discovery, after trial, of information which had been known to the prosecution but unknown to the defense. - United States v. Agurs - 427 U.S. 103 (1976)
In the first situation, typified by Mooney v. Holohan, 294 U. S. 103, the undisclosed evidence demonstrates that the prosecution's case includes perjured testimony and that the prosecution knew, or should have known, of the perjury."
[11] Based on Saturday April 04, 2015 - 03:56:05.18 PM
[12] MLKing  "Nothing in the world is more dangerous than sincere ignorance and conscientious stupidity." ■Ch. 4 : Love in action, Sct. 3
[13] Ida B. Wells v Chesapeake, Ohio and Southwestern Railroad - Southwestern Reporter, Volume 4, May 16-August 1, 1887
[14] If there is only one thing you read this YEAR, please, PLEASE read MR. JUSTICE HARLAN dissenting in the Civil Rights Cases, 1883… AND THEN CONSIDER WHERE "We the People" would be had "WE THE PEOPLE" prevailed in 1883 with constitutionally authorized "necessary and proper" ex industria statute law the 1875 Civil Rights Act!!!!!!!
http://dgjeep.blogspot.com/2013/12/if-there-is-only-one-thing-you-read.html
[15] Be assured that I can and will offer motions that I submitted to the Court and their police testimony to refute the misdemeanor traffic violation per United States v. Agurs - 427 U.S. 103 (1976) "In a series of subsequent cases, the Court has consistently held that a conviction obtained by the knowing use of perjured testimony is fundamentally unfair, and must be set aside if there is any reasonable likelihood that the false testimony could have affected the judgment of the jury."
[16] "To say that appellate courts must decide between two constructions proffered by the parties . . . would be to render automatons of judges, forcing them merely to register their reactions to the arguments of counsel at the trial level."  Rentways, Inc. v. O'Neill Milk & Cream Co., 308 N.Y. 342, 349, 126 N.E.2d 271, 274 (1955)
[17] Floyd and Barker (1607), (1607) Easter Term, 5 James I In the Court of Star Chamber.
[18] Knowable is limited only by a jury of my equal's decision based on facts in evidence. 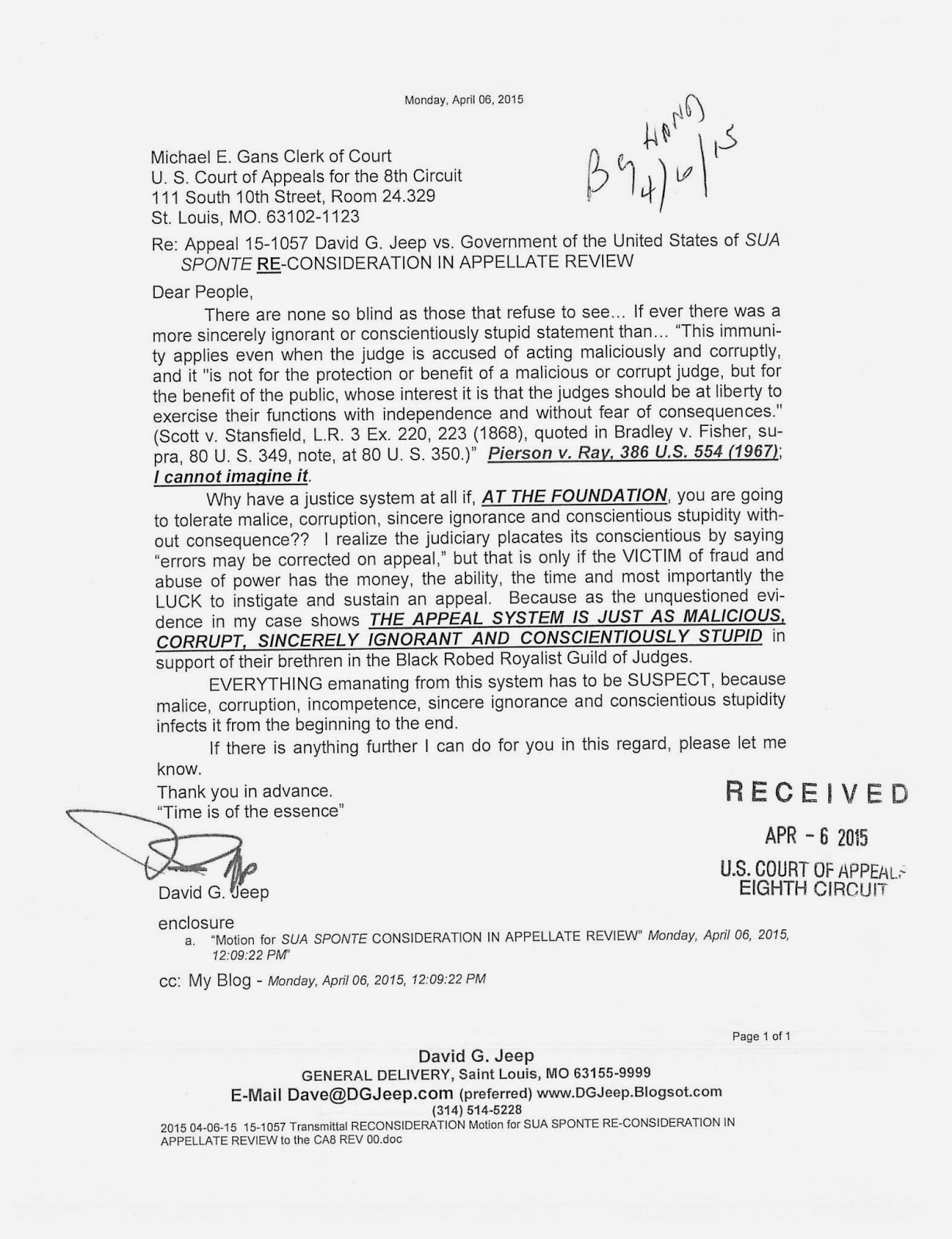 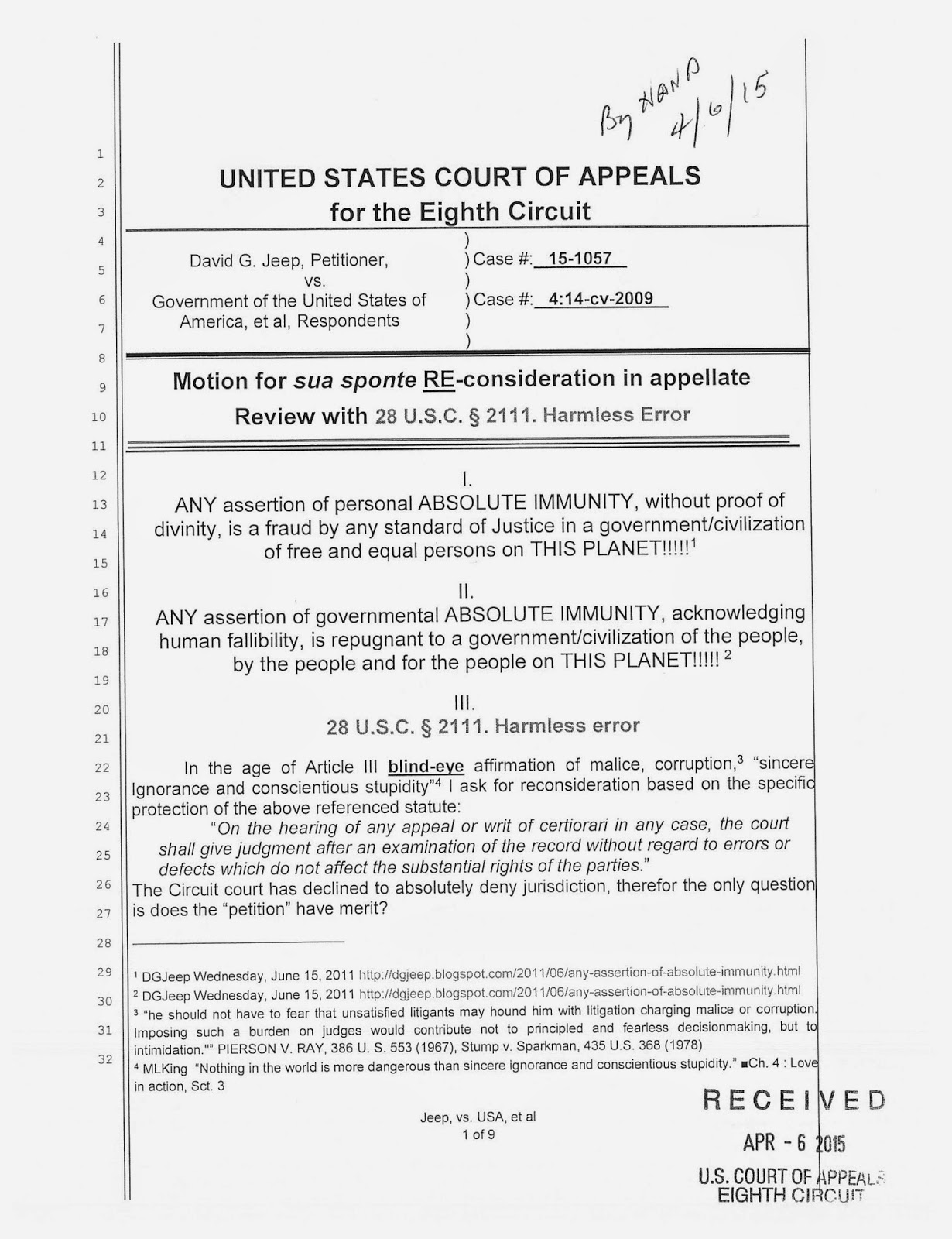 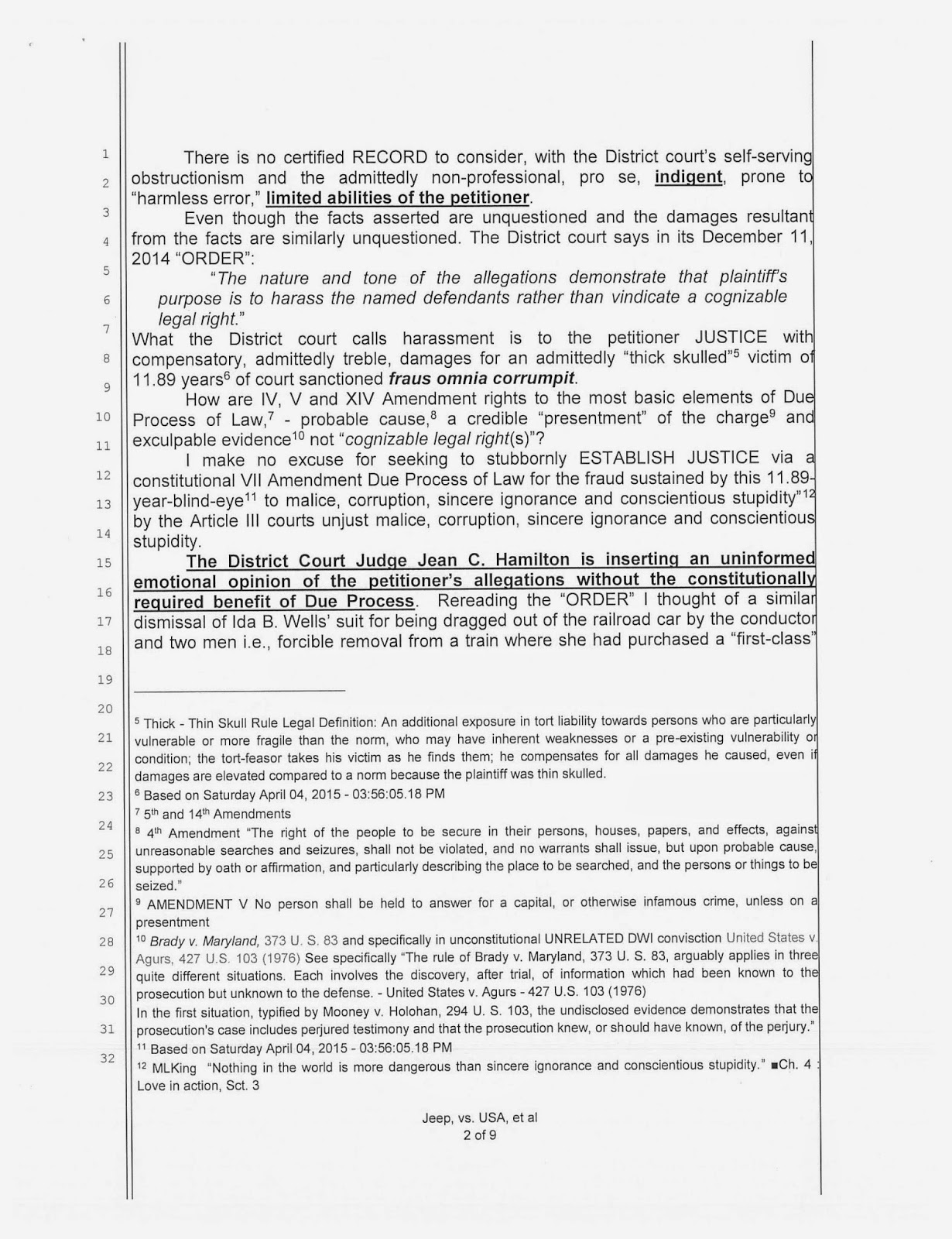 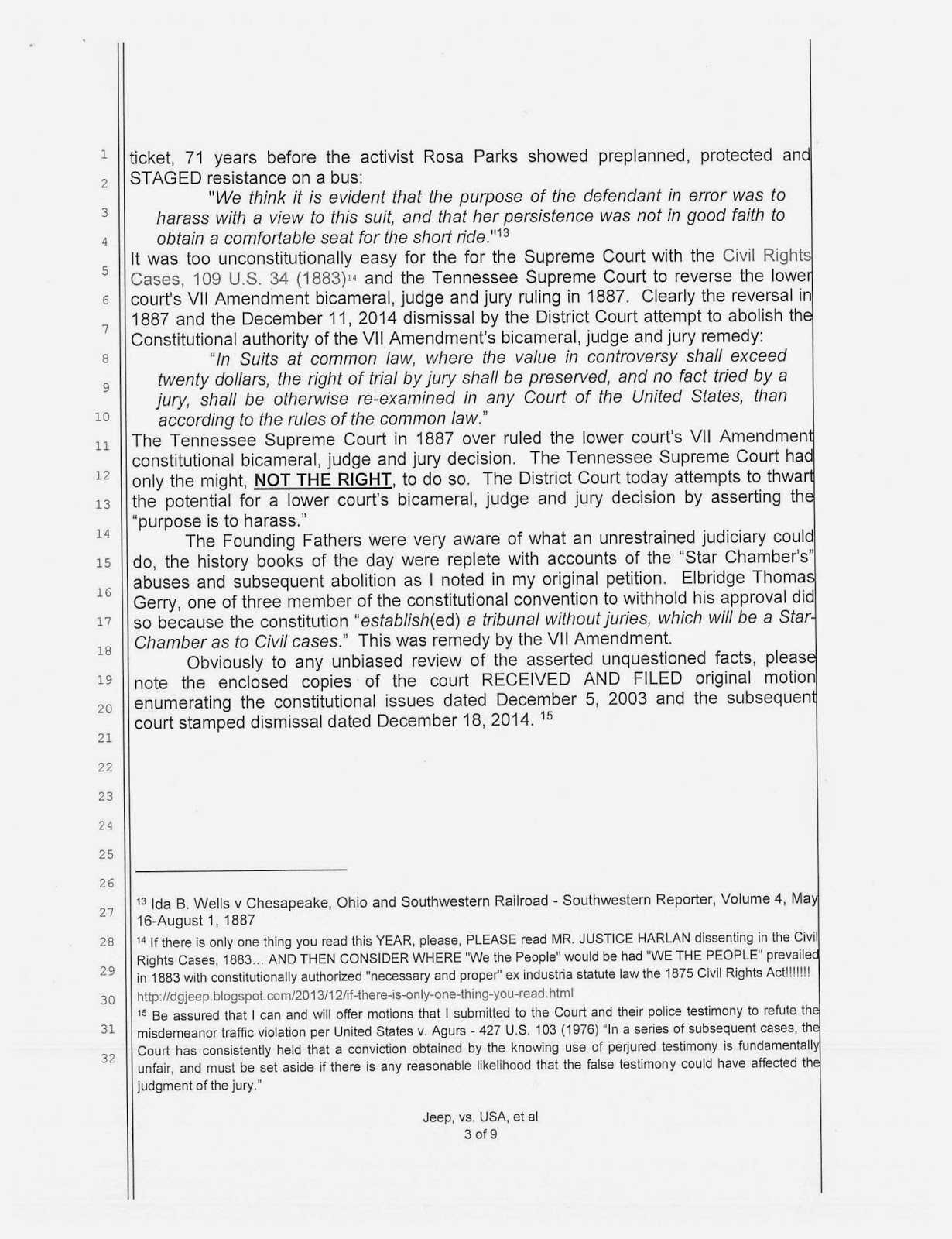 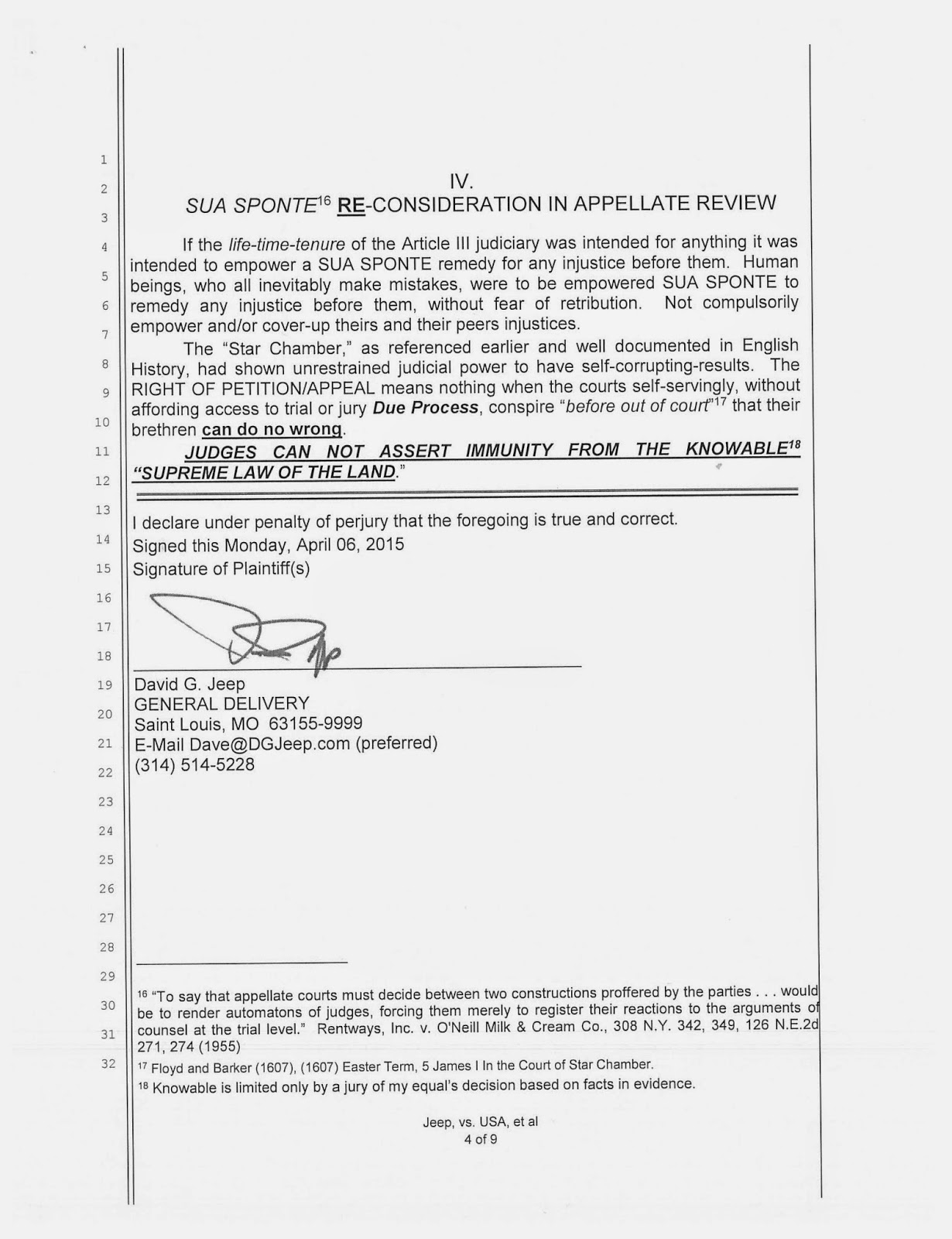