If reasonable probable cause (reckonabilty[8]) does not limit jurisdiction nothing can.

If reasonable probable cause (reckonabilty[8])
does not limit jurisdiction nothing can.

It is "beyond debate"[9] ludicrous to believe that the founding fathers ever thought to provide a constitutional conclusive presumption of absolute immunity[10] to anyone.  Much less specifically "judges are absolutely immune from liability for their judicial acts,"[11] or generally, "for all persons -- governmental or otherwise -- who were integral parts of the judicial process."[12]  Absolute immunity creates martial law at the expense of ANY constitutional assertion.

The founding fathers wanted more than a parchment guarantee. [13]

"In a word, as a man is said to have a right to his property, he may be equally said to have a property in his rights.
"Where an excess of power prevails, property of no sort is duly respected. No man is safe in his opinions, his person, his faculties, or his possessions." [14]

The founders had NUMEROUS TIMES seen the abuse of unrestricted power in general and judicial power specifically.  The founding fathers, in 1789, were well-versed students of history, the Act of Parliament "Abolition of the Star Chamber" [15] (1641), the Bloody Assizes (1685)[16] and the Writs of Assistance – "Wilkes and Liberty." (1763)[17]

That would be, in 2017, as relevant as the 14th Amendment (nor shall any state deprive any person of life, liberty, or property, without due process of law; nor deny to any person within its jurisdiction the equal protection of the laws. (1868)), 16th Amendment (federal income tax, ratified (1913)), and Maastricht Treaty (formally, the Treaty on European Union, (1991)).

Do you think there is anyway in the world sub silentio that the founding fathers, thought Judges' bad acts in the Star Chamber, Bloody Assizes and Writs of Assistance should be covered by some postulation of unwritten conclusive presumption of absolute immunity[18]?

The only other defense of "absolute immunity" is that to hold everyone accountable to the "rule of law" would expose them to "continual Calumniations"[19] or "vexatious actions."[20]  There would be too many suits "to petition the Government for a redress of grievances."  The unfettered inalienable constitutional right assured by the 1st amendment would be impossible.  That is an admission that the ends of justice of our founders is not worthy of pursuit.

MR. JUSTICE HARLAN (and I) dissenting - "Constitutional provisions, adopted in the interest of liberty and for the purpose of securing, through national legislation, if need be, rights inhering in a state of freedom and belonging to American citizenship have been so construed as to defeat the ends the people desired to accomplish, which they attempted to accomplish, and which they supposed they had accomplished by changes in their fundamental law. By this I do not mean that the determination of these cases should have been materially controlled by considerations of mere expediency or policy. I mean only, in this form, to express an earnest conviction that the court has departed from the familiar rule requiring, in the interpretation of constitutional provisions, that full effect be given to the intent with which they were adopted."[21]

"Justice is the end of government. It is the end of civil society. It ever has been and ever will be pursued until it be obtained, or until liberty be lost in the pursuit."[22]

I seek both injunctive relief and monetary damages, as an escalating amount, noted in the several prior petitions for writ of certiorari.
If there is anything further, I can do for you in this regard, please let me know.
Thank you in advance.
"Time is of the essence"
David G. Jeep
cc:  Clerk of Court - Michael E. Gans, 8th Circuit Court of Appeals 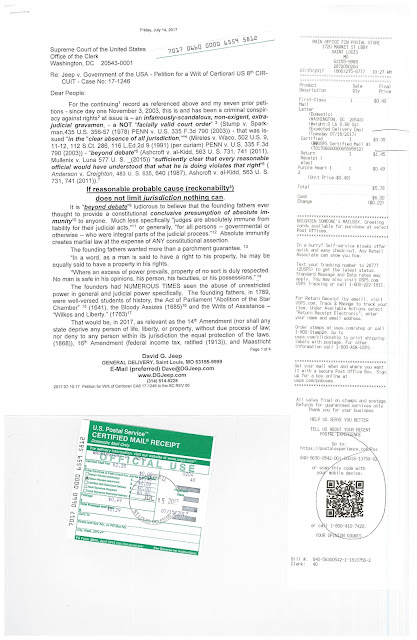 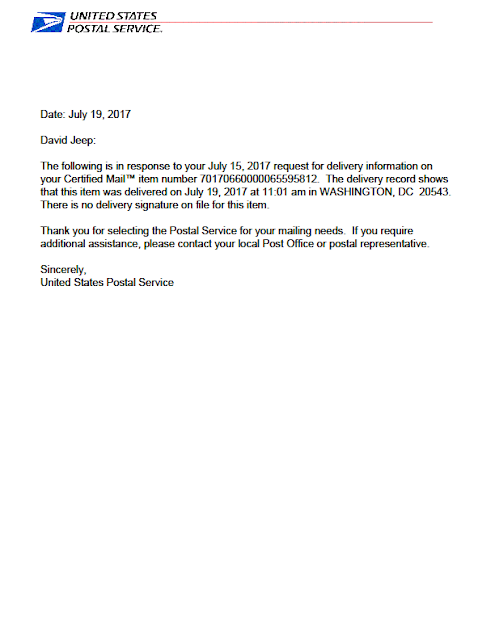