If you naively believe that the New Orleans District Attorney’s office is the ONLY source of malice, corruption, dishonesty, false testimony, incompetency[2] and the denial of exculpable evidence we are ALL in trouble!!!!!!!!!

Ruth Bader-Ginsburg, Elena Kagan, Sonia Sotomayor, and Stephen Breyer
Supreme Court of the United States
Washington, DC 20543-0001
Re:      We have a problem (4:11-cv-0931-cas, USCA8 No. 11-2425[1])!!!!!!!!!!!!!!!!
Dear Justices,
We the People no longer have access to Justice.  If you naively believe that the New Orleans District Attorney's office is the ONLY source of malice, corruption, dishonesty, false testimony, incompetency[2] and the denial of exculpable evidence we are ALL in trouble!!!!!!!!!  How are We the People suppose to overcome Absolute Immunity as utilized before out of court[3] as if they were Nobility?[4]  We the People have to OVERCOME ever more "difficult problems of proof," and a "stringent standard of fault"[5] for JUSTICE in America!!!!!!!!  Those are the same objections asserted for the King, for the "King can do no wrong."[6]
False and malicious prosecutions[7] are empowered before out of court[8] all over America by your blanket grant of Absolute Immunity to "malicious or corrupt" judges,[9] the "malicious or dishonest" prosecutor, [10] the "knowingly false testimony by police officers"[11] and all malicious, corrupt, dishonest and incompetent[12] "persons -- governmental or otherwise -- who were integral parts of the judicial process" [13] acting UNDER COLOR OF LAW.
The first and MOST important right of any person anywhere is the unalienable right to Justice.  Justice is diametrically and irreconcilably opposed to the sanctioning of malicious, corrupt, dishonest and incompetent[14] actions.  Our founding fathers assumed this as a self evident binding result of its foremost position in the preamble to the constitution:
"We the People of the United States, in Order to form a more perfect Union, establish Justice, insure domestic Tranquility, provide for the common defence, promote the general Welfare, and secure the Blessings of Liberty to ourselves and our Posterity, do ordain and establish this Constitution for the United States of America."
They had lived under the Royal Prerogative without regard to Justice for too long.  James Madison expressed it without a doubt as, "Justice is the end of government. It is the end of civil society. It ever has been and ever will be pursued until it be obtained, or until (life or) liberty be lost in the pursuit."[15]
Our founding fathers had learned, first hand, All rights are based on a foundation of Justice.  The raisons d'etre for Civilization… Government is the establishment of Justice.  I repeat again, "Justice is the end of government. It is the end of civil society. It ever has been and ever will be pursued until it be obtained, or until (life or) liberty be lost in the pursuit."
I was held to answer TWO infamous charges, spousal abuse and DWI, without the most basic and essential requirements of Due Process rights, probable cause and exculpable evidence.  Everything I ever cared about was taken from me as a result, from my son and my home, to my little baseball glove.  I was forced into a fight, where my adversary had been empowered by all that had been taken from me.
Just a bare minimum cursory look at the evidence, a hand written petition at the commencement of the fraud,[16] exposes this unavoidable conclusion.  The petition for the order of protection list no probable cause that could require the courts involvement for protection of the alleged victim.  What it fraudulently gives as probable cause is a sensationalized hearsay account of an infamous charge from a preliminary hearing for charge of DWI, a different subject matter jurisdiction, in a different geographical jurisdiction under a different judicial officer's jurisdiction, where the alleged victim was not even present, by her own admission.  If ever there was a more COMPLETE lack of jurisdiction I would like to see it.
After being served and ordered by a warrantless court order, I was forced into a court to defend myself against an infamous charge that had no probable cause.  The Family Commissioner, a judicial officer of LIMITED jurisdiction, then found and I quote:
"The Court finds--First of all, the Court amends the pleadings to conform with the evidence adduced.  The Court does find the allegations of the amended petition to be true."[17]
My attorney of record objected pre-trial at trial in court and immediately after made TWO post trial written motions for a copy of the alluded to the "amended pleadings" and then to be heard on said pleading.  Neither motion was ever granted!!!!!!!!!!  I was thus denied my God given custody rights to MY SON!!!
On the Second fraudulent[18] charge, the DWI, [19] then presiding Judge, Judge Bennett, recused himself for his bad acts that had been fraudulently blamed on the respondent in the ex-parte order of abuse.  During the pretrial motions FORMAL written request for specific exculpable evidence were heard and DENIED.  At trial, the two arresting officers knowingly gave false testimony, fraud, [20] incriminating themselves to contradict the exculpable evidence that had been criminally[21] DENIED the defendant!
"Give(n) a person of ordinary intelligence fair notice"[22] We the People no longer have access to Justice.  We the People no longer have the protection of the law!!!!
I currently have a Writ of Certiorari in the clerk's office (4:11-cv-0931-cas, USCA8 No. 11-2425).  I can not get past their difficult approval process.  I am self represented, pro se, and I have cited the potential for harmless error:
"28 USC § 2111 - Harmless Error, On the hearing of any appeal or writ of certiorari in any case, the court shall give judgment after an examination of the record without regard to errors or defects which do not affect the substantial rights of the parties"
to no effect.
HELP!!!!!!!!!!!!!!!!!!!!!!!
If there is anything further I can do for you in this regard, please let me know.
Thank you in advance.
"Time is of the essence"
David G. Jeep
enclosure
a.     "Copy of Sharon G. Jeep's FRAUDULENT hand written petition that I received (11/03/03) served as an exp-parte order of protection by Judge Goeke and then ordered heard by Commissioner Jones over PRETRIAL objections"
cc:  My Blog - Wednesday, November 09, 2011, 2:05:56 PM 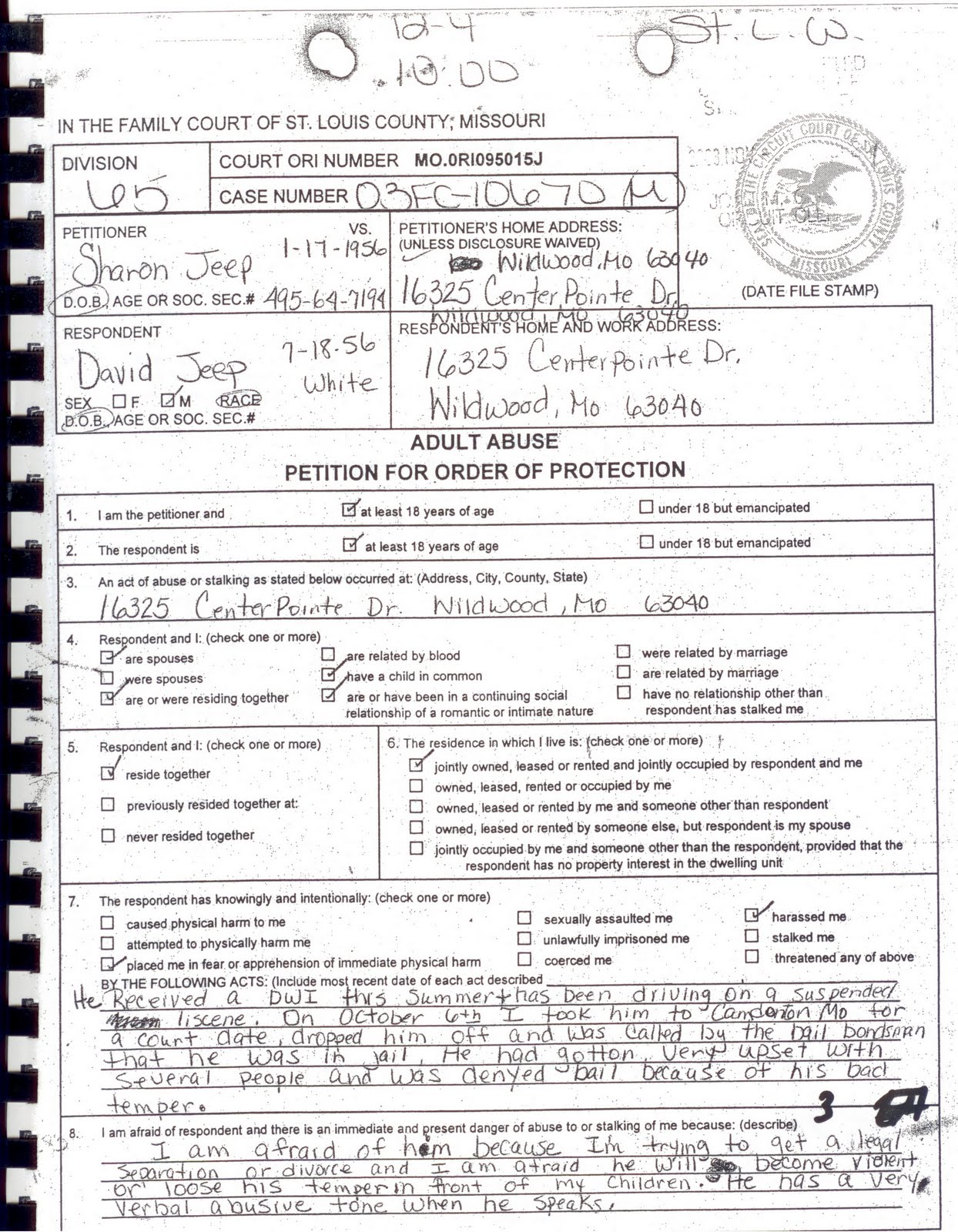