Re: Sharon Jeep at Camden County
10-06-03 Receipts for purchases

Please find the enclosed receipts for purchases made by my wife while she was in Camden and Osage Beach. She made two purchases at Wal-Mart one at 10:30:39 and one at 12:05:39. She made a purchase at Tommy Hilfiger at 1:23 PM. If you would have given us a chance we could have produced these. Also I can get my Son’s school to verify that we called to excuse him from school and that he indeed was not in attendance at all Monday 10-06-03. My wife asked off work also.

I also have record of the Cingular Problem report referenced as 221164. I am including a copy of her note pad
If there is anything you need from me in this regard, please let me know. 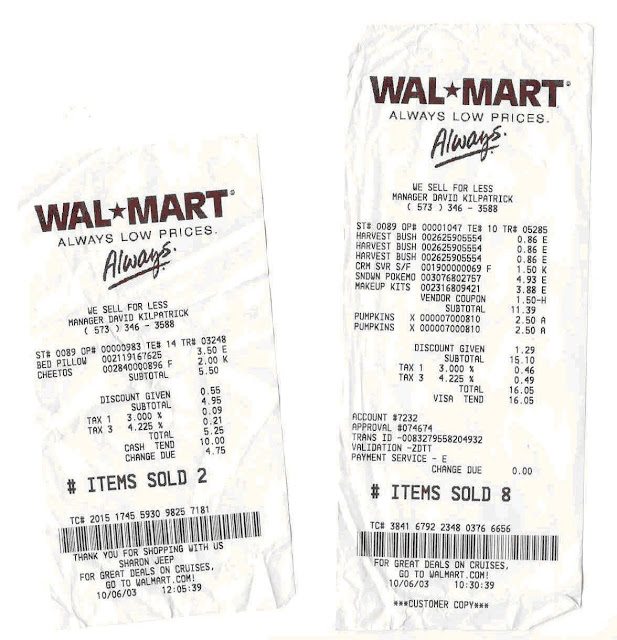 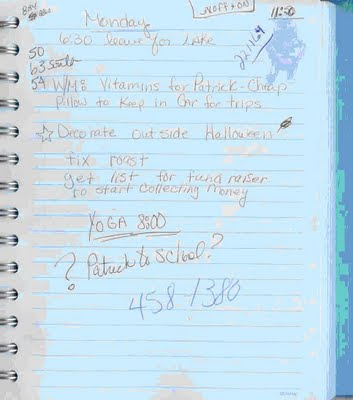 Commission on Retirement, Removal and Discipline of Judges, Wednesday October 8, 2003

Dear People,
To introduce myself, I am a 47 year old man I am married, two kids and a mortgage. I have never done anything illegal beyond a traffic ticket. I have lived in Missouri all my life. I have to date been able to maintain a pretty nice life here. But that has all changed recently. I have a trial currently pending before Judge Bennett. Without involving you in the specific legal issues, I will tell you the probably cause at 1:00 AM on a virtually deserted highway was my failure to use my blinker when changing lanes. Furthermore there was no accident, no property damage, no speeding, no reckless driving nothing beyond the failure to signal. And because of this, I can not work, I can not even legally go out and look for work I am house bound in that I can not drive. My wife is threatening to leave me. I have actively been pursuing my day in court since the incident occurred. First via a lawyer whose plan of defense was DELAY, DELAY, DELAY and now acting as my own defense attorney?

The reason for my grievance and my writing to you at this time occurred Monday 10-06-03. I had a motion hearing scheduled for this last Monday 10-06-03, 9:00 AM. I am currently under an order not to drive for being accused of refusing to blow on a breathalyzer via a 2:30 AM closed door tribunal on May 17, 2003. Too this date some 5 months later I still have not had my day in court. My life is about to be destroyed.

Monday morning, I had my wife take off work and took my son out of school, I had no other option, to drive me down to Camden County. We live in Grover, MO, just west of St. Louis, MO. We left our house in Grover at 6:30 AM. It was my hope that if we got there at 9:00 we might be able to get away by 10:00 and be home by noon, and my son would only miss a half day. We have in the past always taken the 40 west to I70 West to US54 South. My wife was driving. For some reason, I still do not know why, maybe it was the fog; we started out wrong and filled up for gas at 109 and I44 in Eureka. Once I realized we were headed the wrong way I told my wife to turn around and head back up 109 to 40. But this put us 30 minutes behind our schedule. Just before we made the turn at Kingdom City on to US54 South, I called the courthouse. It was 8:05 AM +/-. The switchboard was closed, the message stated that the courthouse was closed and that it would reopen at 8:30. I called back approximately 8:35 AM and left a message for the court that I was going to be 30 minutes late. I called again at 9:30 AM to find out where I was suppose to go for this meeting, they informed me that court was in session and that all business would be held in the courtroom.

We arrived at the Camden County Courthouse; my wife let me off. She then went to take my son to McDonalds for breakfast and I think Wal-Mart. We made arrangements to meet back at the court house at 11:00 AM. My wife because she had just recently lost her cell phone, and the replacement, although presumably turned on by Cingular, was not working. I immediately went up to the courtroom and checked in at 9:30 +/-. I sat in the back of the courtroom awaiting my docket call for the next 3 hours. In turn I set up meetings with my wife at 11:00 am and 12:00 in the parking lot. Just prior to our 12:00 noon meeting I was called. I went up to the Bench as instructed.

Judge Bennett immediately jumped all over my case. He was accusing me of being 30 minutes late and making a federal case out of it. I as politely as I could explain that I had gotten turned around in the fog that morning and was delayed because of a wrong turn. He immediately and with out giving me any chance to explain further informed me that he was revoking my bond and that I was going to Jail. I was escorted from the courtroom and locked to holding cell bench in the side room. I explained to the bailiff that my wife and 8 year old son were out shopping and that she had driven us down here. Furthermore I explained about her cell phone and that we could not immediately reach her. I told my story to two of the bailiffs a man and a woman. Furthermore I explained that my wife was scheduled to meet me on the parking lot at 12:00 some ten minutes away. I gave the female bailiff the car make, a Red Transport Minivan and the license plate number 229-AXE. I then asked if she would go out to the parking lot to see if she could find my wife and invite her back into show herself and prove that she was there and that she had driven.

I was handed some paperwork stating that I would be required to do a cash bond of some $3,500 to get out of jail. This was on top of a $6,000 surety bond that was already being held by the court. I was taken to the jail and put into the holding cell. Sometime later I got a hold of the Bail Bonds man I had used for my original issue. He said he would work up a cash bond and get me out. Which he did. I gave him my wife’s cell phone number in that it was suppose to be turned on again sometime Monday afternoon. He raised my wife Sharon on the phone. They worked up the Cash Bond.

They went back up stairs and then my NEW cash bond was then refused. I was informed that I would be spending the night at least in jail. My wife and 8 year old son went up to the courtroom. I was not there but, I can’t imagine that my wife was not at or near tears nor that my 8 year old son was not terrified daddy had been taken and jailed. They explained in person to the same bailiffs I had spoken to originally and explained the situation, again stating that they had been there all day long and that they had driven me down that morning. The bailiffs said they would tell the judge, but that the judge was not willing to talk to her and that I was not getting out of jail today. I was held over night Monday night, my wife and 8 year old son had to drive home, for work and school on Tuesday, not knowing if or when I would be free again. Tuesday afternoon I was informed that there might be potential for me to be bailed out. My bails bondsman had been negotiating for me. I was released Tuesday 6:00 PM approximately and alone in Camden, Mo without transportation and without any cash in that the jail had taken my cash and would be reimbursing me via check in a few days. Luckily my Bondsman drove me to Kingdom City and my brother was then able to drive to Kingdom City and pick me up.

I do not know if you have ever been thrown in jail, but it is a very degrading experience and to say the least is damaging to your reputation. I had to endure this humiliation in the eyes of my brother, my wife and my 8 year old son. My complaint is thus, the judge is supposed to be looking for the truth not making arbitrary ruling on his mood, or whatever. If he had just let me know at 9:30 when I checked in that he had an issue, I could have pulled my wife out of the mall and had her there with me in the courtroom and all this could have been avoided. To date the issue has cost me an additional $2,700 dollars, $1750 of which is a bond. More importantly it has delayed my life in that I will not be able to drive until the revised court date now some 42-60 days off. But more important than any of that was the humiliation of a father in his son eyes. And all of this while I am presumed an innocent man.

Receipts of Purchase in Camden the Afternoon of 10/06/03

Please find the enclosed receipts for purchases made by my wife while she was in Camden and Osage Beach. She made two purchases at Wal-Mart one at 10:30:39 and one at 12:05:39. She made a purchase at Tommy Hilfiger at 1:23 PM. If you would have given us a chance we could have produced these. Also I can get my Son’s school to verify that we called to excuse him from school and that he indeed was not in attendance at all Monday 10-06-03. My wife asked off work also.

I also have record of the Cingular Problem report referenced as 221164. I am including a copy of her note pad
If there is anything you need from me in this regard, please let me know. 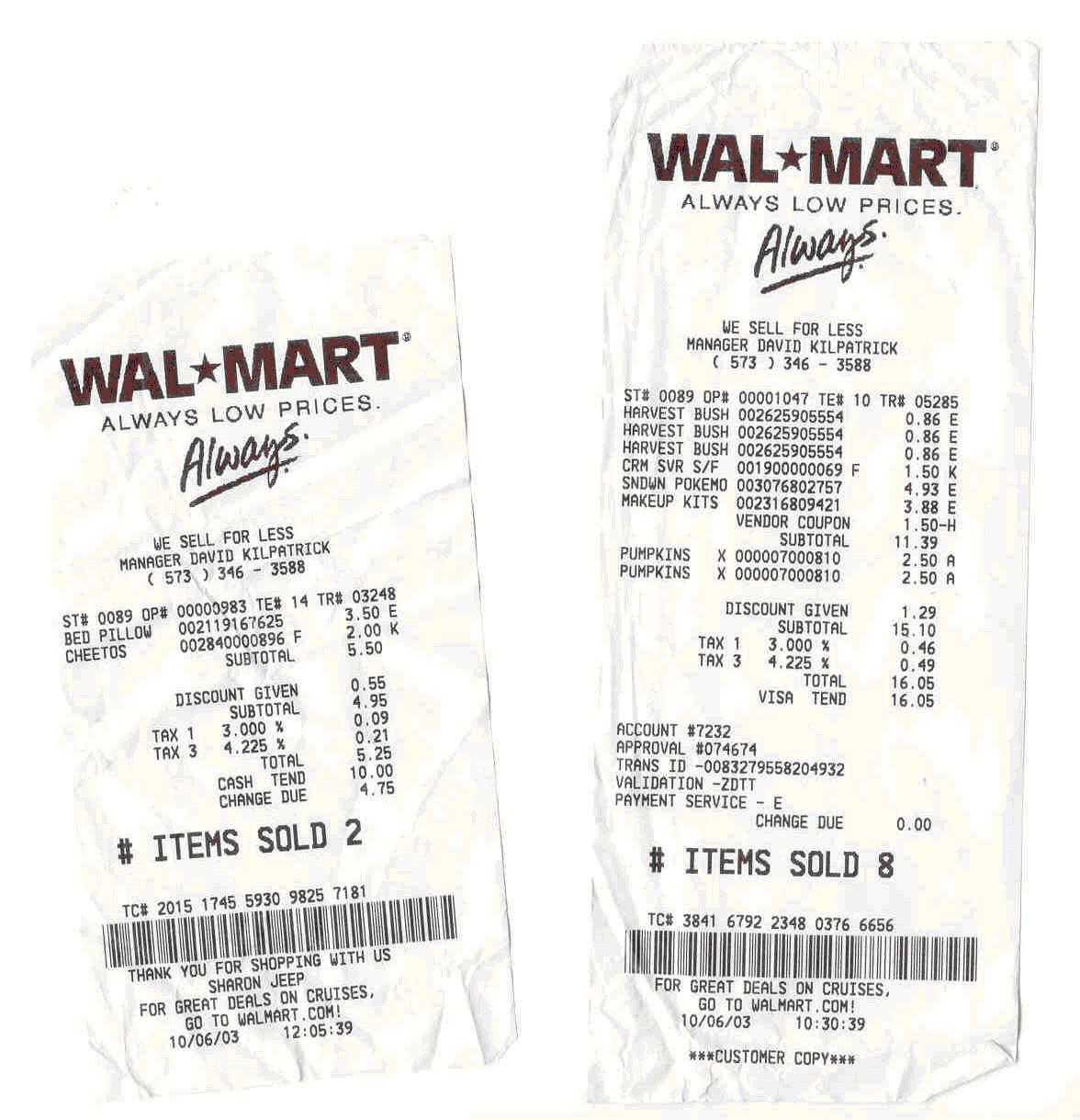