“a codicil” Motion for reconsideration - David G. Jeep, Plaintiff, vs. Government of the United States of America, et al, 4:13-cv-00360-ERW

Dear Mr. Webber,
As regards your oh so beloved unconstitutional asserted judge made law of "absolute immunity, I have to quote, not sure where I got this from but it hits home for me:

The massive on going manifest evil in the clearly criminal Federal Judiciary's conspiracy[1] against rights, has BOTH mens rea[2] and actus reus[3] for their ACTIONS!  The assertion of the potential of "continual calumniations"[4] and "vexatious actions"[5] does not excuse the denial of rights,[6] the raison d'être[7] for their existence.  I seek the constitutionally[8] and statutorily secured civil[9] and criminal[10] redress for the justifiable grievances, the denial of rights.[11]

The fraud exception to rei publicae, ut sit finis litium,[12] and nemo debet bis vexari pro una et eadam causa[13] is self evident to me, but alas I believe in the "sense and reason"[14] of a Supreme Law of The Land.  You assert judicial interpretation.  Here we agree as noted in United States v. Throckmorton, 98 U.S. 65 (1878) is applicable here "But there is an admitted exception to this general rule in cases where, by reason of something done by the successful party[15] to a suit, there was in fact no adversary trial[16] or decision[17] of the issue in the case. Where the unsuccessful party has been prevented from exhibiting fully his case by fraud or deception practiced on him by his opponent, as by keeping him away from court."  Not only was the petitioner, the unsuccessful party, never given a chance to defend himself, he was never even given the specifics of the cause for the finding under which his son, his life and all his belongs were taken.
I quote from the court transcript:

"The Court finds--First of all, the Court amends the pleadings to conform with the evidence adduced.  The Court does find the allegations of the amended petition to be true."

Just so you do not think I am some kind of after the fact complainer.  My  attorney of record, made note of the issue beforE the hearing, was over ruled, made note of the issue DURING the hearing was over ruled and filed TWO post trial motions both asking for details of the amended pleadings and then to be heard on same to no avail.  Because of this denial of rights, the petitioner was quite literally thrown out in the street with little more than the clothes on his back as an infamous scoundrel, drunken abuser. I was then forced to fight the recipient of my home, my son and all my worldly property in court, from a greatly diminished position, monetarily, physically and most importantly EMOTIONALLY suffering from undiagnosed post traumatic stress!!!!  I cried myself to sleep for WEEKS!!!!!!!!!!!!!!!!

I realize a decision in favor of the petitioner would require exertion of necessary and proper authority from the federal Judiciary under color of law, but that is exactly what the 14th Amendment requires by asserting that No State Shall.[18]
The assertion in Giles v. Harris, 189 U.S. 475 (1903) that the Federal Judiciary does not have the resources or the responsibility is just FALSE.  Not only does the Federal Judiciary have the delegated constitutional authority to enforce the 14th Amendment on the states, that is "the sense and reason of the law,"[19] its "raison d'être."[20]

If there is anything further I can do for you in this regard, please let me know.
Thank you in advance.
"Time is of the essence" 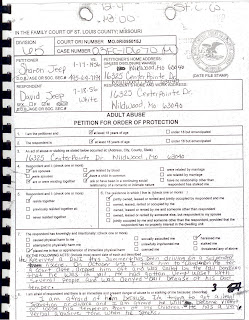 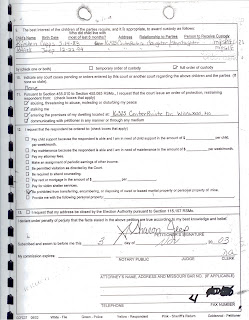