Aaron Hillel Swartz (1986 – 2013) was an American computer programmer, writer, political organizer and Internet activist.  On January 11, 2013, two years after his initial arrest, Swartz was found dead in his Crown Heights, Brooklyn apartment, where he had hanged himself.

In 2008, Swartz downloaded and released about 2.7 million federal court documents stored in the Public Access to Court Electronic Records (PACER) database managed by the Administrative Office of the United States Courts.

Later, according to state and federal authorities, Swartz used JSTOR, a digital repository, to download a large number of academic journal articles through MIT's computer network over the course of a few weeks in late 2010 and early 2011.

Why did he do it?  To prove that he could!  That is not heroic altruistic use of 1st Amendment rights that is GRAND STANDING information terrorism.

Bradley Edward Manning (born December 17, 1987) is a United States Army soldier who was arrested in May 2010 in Iraq on suspicion of having passed classified material to the website WikiLeaks.  The material included videos of the July 12, 2007 Baghdad airstrike and the 2009 Granai airstrike in Afghanistan; 250,000 United States diplomatic cables; and 500,000 army reports that came to be known as the Iraq War logs and Afghan War logs. It was the largest set of restricted documents ever leaked to the public. Much of it was published by WikiLeaks or its media partners between April and November 2010.

Of the 750,000 documents it appears there was one video of a questionable engagement.  The evidence in the video does not prove anything.  If this was indeed a free fire zone as it appears, this is war.  This was a core dump by Manning that only one in 750,000 alludes to a questionable issue was LUCK not courage.

Why did he do it?  To prove that he could!  That is not heroic altruistic use of 1st Amendment rights that is GRAND STANDING.

Edward Snowden, revealed in dramatic fashion information that had been common knowledge for SIX years.  He some how created something out of nothing?  He has presumably downloaded 4 laptop computers full of PRIVILEGED information.

It is and has been common knowledge that the federal government archives the records kept by phone companies and others regarding commercial transactions.  The private commercial companies archive this information for their own use, once that private use has evaporated; the government takes this information and archives it for future use.  This is all documented and overseen by the Executive branches direction with the oversight of a divided congress and the less than altruistic Judiciary.

Now what did Snowden's download on to FOUR LAPTOP computers give up to the Chinese in Hong Kong and the Russians in Moscow?  He did not give up anything specific he recklessly gave up a core dump of PRIVLEDGED information just like Manning and Swartz.

None of the so-called HEROS of the NEW information age knew what they were doing.  They did not know what they had.  They never knowingly revealed specific information of wrong doing.  The SO-CALLED heroes Have recklessly and maliciously revealed privileged information via CORE DUMPS that Have strengthened our enemies and DONE nothing to enlighten "We the People."

Why did they do it?  To prove that they could!  That is not heroic altruistic use of 1st Amendment rights that is GRAND STANDING.

I am SO TIRED of Snowden's PRIVATE illegal actions being used to exaggerate the NSA's abilities and desires… and Obama being blamed!!!!!!!!  George W. Bush INITIATED and now Barack Obama administers the NSA programs.  NO ONE has any interest in indiscriminately reading e-mails, tapping phones or NEWS ROOMS!!!!!!!!!!!!  And only people that see “black helicopters” EVERYWHERE would even think that they would.

Any technician can climb a pole and tap a phone.  And when an unauthorized person does that; IT IS A CRIME.  That has always been the CASE... and always will be the case.  Snowden just climbed the proverbial pole on his computer to illegally tap into information, Metadata, he was SWORN to PROTECT!!!!!!!!!!!!!!!!

All the crying done for Assange, Swartz, Manning, Snowden and WikiLeaks is missed placed.  The NSA is, FIRST LINE, limited by access to a court order.

The President / Congress are the SECONDARY lines of defense in NSA OVERSIGHT!!!!  The ABSOLUTELY IMMUNE Black Robed unaccountable judiciary is the first line of DEFENSE of LIBERTY!!!

Look around, Europe is way ahead on privacy law, Google, Facebook and Twitter do more unrestrained malicious and corrupt spying than the NSA and NOBODY COMPLAINS.

It is not the NSA or the CIA or the FBI we should be worried about.  NOW THE ISSUE OF A COURT ORDER IS NOT CONSTRAINED AT ALL, BECAUSE THE JUDICIARY ASSERTS “ABSOLUTE IMMUNITY” FOR ALL!!!!

WE THE PEOPLE NEED TO EXTINGUISH THE POWER OF THE 5 OF 9 PERSONS, STARE DECISIS, ONCE AND FOR ALL!!!!  AND RETURN TO THE BICAMERAL JUDICIARY, JUDGE AND JURY, WE SECURED FOR OURSELVES IN THE CONSTITUTION AND THE 7TH AMENDMENT.

Article III Judicial Power is defined and limited by We the People’s Congress.  It is time that “We the People” assert our control, via congress, of the Supreme Court: “with such Exceptions, and under such Regulations as the Congress shall make." (Article III, Section. 2, § 2)

Internationally Asserted Basic Human Rights, The Constitution for the United States of America and Statute Law  are IGNORED.

I sometimes feel like the waif in “The Emperor’s New Clothes”
AM I THE ONLY ONE THAT CAN SEE IT??

Am I the only one that can see this should be the “mere operation of law” (Marbury v. Madison, 5 U.S. 163 (1803)): "it is a general and indisputable rule that where there is a legal right, there is also a legal remedy by suit or action at law whenever that right is invaded."


Andrew Downs, Clerk of the Court
THE DEADBEAT - Supreme Court of the United States
One First Street N.E.
Washington, DC 20543-0001

Dear Mr. Downs,
I acknowledge our phone conversation of June 26, 2013.  I am herewith complying with your stated requests to the best of my humble pro se indigent ability via return post of First-Class®- Certified Mail™. I have to RESTATE the obvious, for self-serving criminal reasons the Supreme Court is quite literally incompetent in tracking their correspondence.  I fully realize, though I refuse to concede to it, that your self-serving criminal GOAL as with all petitions is to deny, Deny, DENY!

Any help you can give me in expediting this ALREADY 10.12 year effort, would be greatly appreciated.

"it is a general and indisputable rule that where there is a legal right, there is also a legal remedy by suit or action at law whenever that right is invaded."

"I am next to consider such injuries as are cognizable by the Courts of common law (7th Amendment). And herein I shall for the present only remark that all possible injuries whatsoever that did not fall within the exclusive cognizance of either the ecclesiastical, military, or maritime tribunals are, for that very reason, within the cognizance of the common law courts of justice, for it is a settled and invariable principle in the laws of England that every right, when withheld, must have a remedy, and every injury its proper redress."

As confirmed by the United States District Court, Eastern District of Missouri, Eastern Division and the 8th Circuit Court of Appeals I am indigent.  As a lone pro se indigent petitioner,[2] I obviously do not have the financial ability to bureaucratically serve all the respondents.  The Federal Government per the Constitutional Guarantee is to provide the protection of the Supreme Law of the Land for all persons equally.  Due process is defeated by your bureaucratic DENIALS.

cc:  My Blog - Friday, June 28, 2013, 10:31:45 AM
[1] PENN v. U.S. 335 F.3d 786 (2003)
[2] Because I am a humble non-legal professional and I have been impoverished by this criminal issue I cite the potential for Harmless error - 28 USC § 2111,  The inherent unconstitutional denial of justice based on the malicious, corrupt, dishonest, incompetent and UNCONSTITUTIONAL ruling in Briscoe v. LaHue, 460 U.S. 335 (1983), "the common law provided absolute immunity from subsequent damages liability for all persons -- governmental or otherwise -- who were integral parts of the judicial process," makes a professionally prepared petition and or appeal untenable to the average victim.  Most are not only impoverished by the injustice, but also in jail behind bars.  With 5% of the world's population our POLICE STATE now incarcerates 25% of the world's prisoners.
Appeal Eighth Circuit Court of Appeals:  12-2435
Eastern Missouri U.S. District Court Case No.  4:12-cv-703-CEJ
A humble pro se EMERGENCY PETITION for a WRIT OF CERTIORARI, 10.02 years of deprivation, IN THE SUPREME COURT OF THE UNITED STATES
David G. Jeep
VS.
The Government of the United States of America,[1] et al,
I state that per Andrew Downs' letters dated May 15, 2013, June 3, 2013 and our phone conversation of June 26, 2013 I have on numerous occasions mailed communication, starting in September of 2012 (USPS Shipment Info for 7012 1010 0001 4416 3690 09/14/12  1:38pm).  Specifically several copies of the above referenced EMERGENCY petition for writ of certiorari and not received any response.  I have consistently within 7 days of receipt of any communication from the court responded.  I have at times written unsolicited follow-ups to inquire as to status of the petition for writ of certiorari.
I herewith include and make a part of this affidavit an Attachment "A" detailing 13 dated mailings in regard to my petition.
I herewith include and make a part of this affidavit an Attachment "B" (on 2 each pages) copies of US POST OFFICE marked receipts for seven of the referenced mailings.


I declare under penalty of perjury that the foregoing is true and correct. Executed on, Thursday, June 27, 2013

[1] This is not a typo, there was a motion made to correct this caption at the inception of the issue, see the court RECORD.  I am suing my Government in the respectful form of a petition!!!!! 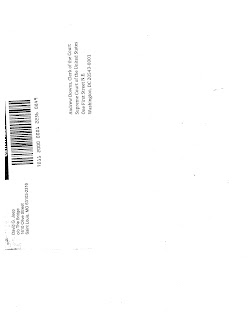 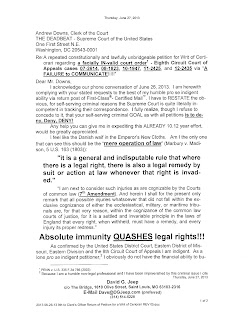 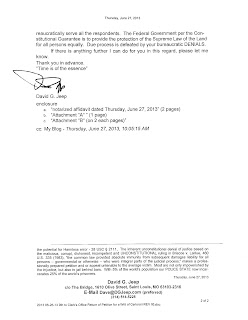 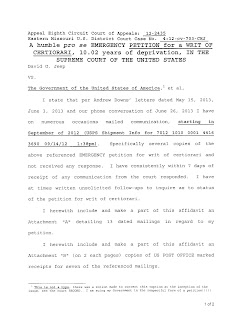 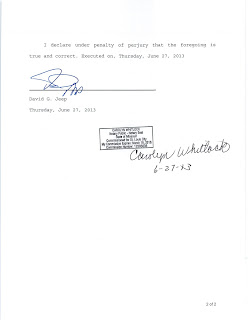 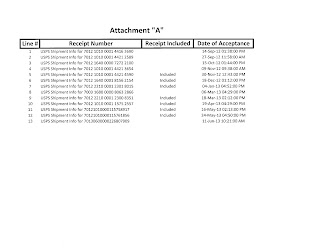 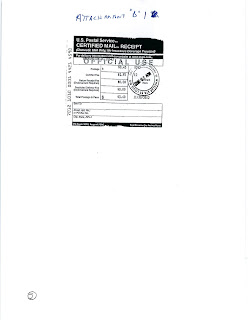 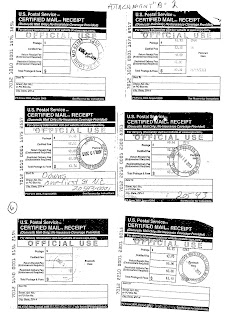