​There is only one issue right now, The CRIMINAL-RICO-FRAUD in the Trump University case!!! We can not let any possibility for an Emolument while in office or NO-Prosecute for Hillary DISTRACT US!!! #NEVERTRUMP 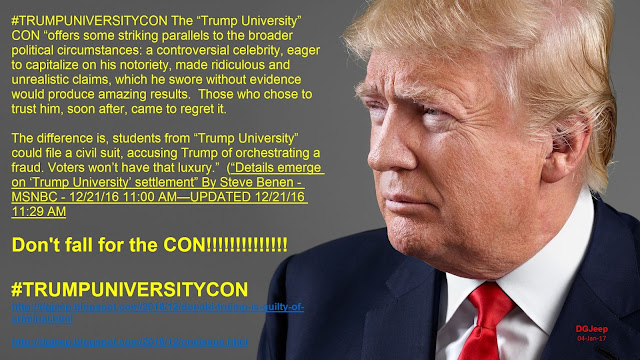 I realize Bill Cosby is African American, and there still are different rules for them, BUT Bill Cosby is being prosecuted right now for his incriminating criminal testimony in a settled civil suit.  We can do the same thing for the Donald TRUMP!!!!!!! Donald GAVE INCRIMINATING testimony that has yet to see the light of day in a CRIMINAL TRIAL!!!!!

There is only #oneissue right now, the CRIMINAL prosecution of Trump for the RICO-MAIL-FRAUD in the #TRUMPUNIVERSITY and the ADMITTED-criminal-self-dealing with #TRUMPFOUNDATION cases as they affect the Electoral College!!

IT MATTERS that Donald Trump, as a citizen, is guilty of federal racketeering-mail-fraud, and admitted-criminal-self-dealing with his FRAUDULENT Trump university and foundation before he takes any part of the presidency!!!!!! 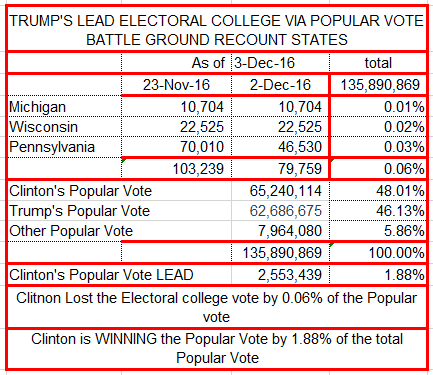 Hillary is innocent!  A no prosecute for Hillary  is completely unacceptable if it is quid pro quo Trump will not be prosecuted for Fraud and Racketeering in Criminal COURT!!!!!!!!!!  Are we being played AGAIN?????????

WE were being played this weekend with the Hamilton Cast, Saturday Night Live AS diversions! There is only one issue right now, The CRIMINAL-RICO-FRAUD in the Trump University case!!!

Trump tweeted "The ONLY bad thing about winning the Presidency is that I did not have the time to go through a long but winning trial on Trump U. Too bad!" That is a BOLD FACE LIE!!  If that were the case he could have settled 5 years ago and saved $25,000,000, 5 years of LEGAL FEES delaying and THE continued  criminal RICO action he faces now!!!

A $25,000,000 settlement without any acceptance or assignment of culpability is an insult to the American Justice System!

If U.S. District Judge Gonzalo Curiel wants to DO HIS JOB and heal the country, he must act as Judge in the interests of justice!!!  He needs to DECLINE to sign off any payout without an assignment of civil and thus potentially CRIMINAL guilt!!  A $25,000,000 settlement without any acceptance or assignment of culpability is an insult to our Justice System!

Trump has been selling, pardon my NOT politically correct "Trump-like" speak, BULLSHIT from day one of the 2016 presidential campaign.

1.  Because over the last FIVE YEARS he did not want to testify to put to rest a potential liability.
2.  Now he needs to work for the AMERICAN PEOPLE unfettered by any bogus claims against his integrity.

Again, in NOT politically correct Trump-like speak, that is pure unadulterated BULLSHIT of the very finest quality!!!!!  THAT BULLSHIT assertion, in and of itself, IS FRAUD!!!  The Trump University student-victims have him by the proverbial short hairs.

Trump must ACCEPT his guilt for TRUMP UNIVERSITY #TRUMPUNIVERSITY!!!  Justice demands that he be held to account civilly and criminally.  REAL issues demand justice, FAKE NEWS needs to be exposed!!!

"Trump is paying $25 million to put the Trump University fiasco behind him. Here's why we shouldn't let him.
http://www.latimes.com/business/hiltzik/la-fi-hiltzik-trump-university-20161121-story.html 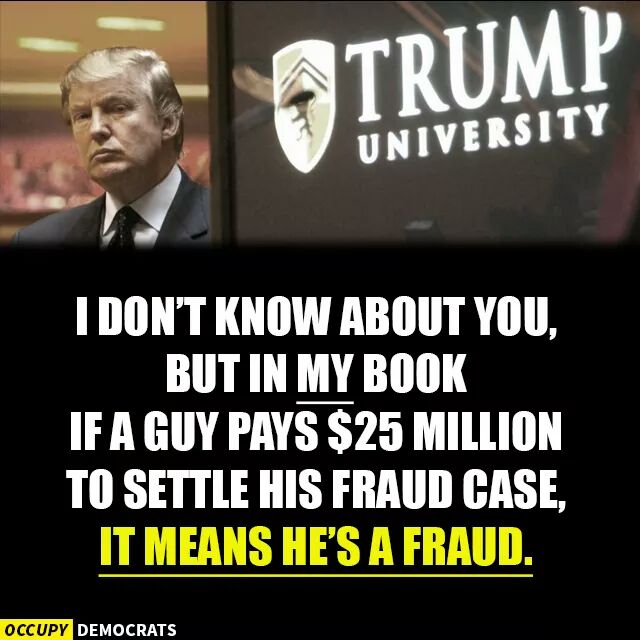 Thanks in advance,
To Kill a Mocking Bird, The Denial of Due Process
"Agere sequitur esse"
"Time is  of the essence"
David G. Jeep,
Federal Inmate #36072-044 (formerly)
http://dgjeep.blogspot.com/  or www.DGJeep.com
My E-mail addresses are David.G.Jeep@GMail.com or Dave@DGJeep.com